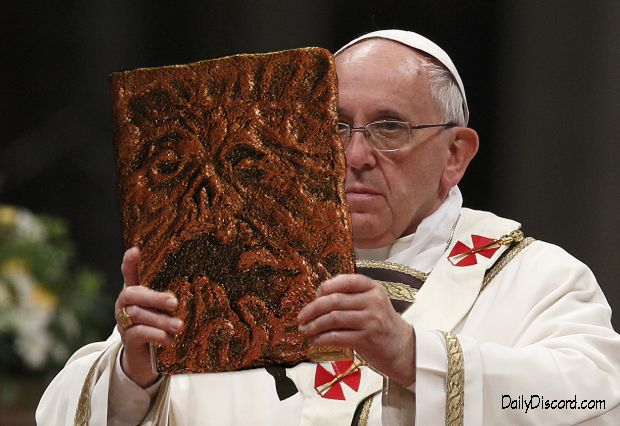 Rome—Today the Pope, who usually tends to pooh pooh the intentional summoning of demons, unveiled his controversial plans to take down President Trump with an ancient evil. The Pope apparently stumbled upon the Necronomicon Ex-Mortis in the Vatican while “poking around the basement.” Many fear that since discovering the book, The Pope has become obsessed with it. “It’s a good read,” said the Pope. “The Kandarian Demons and their Deadite minions really out did themselves on this one. The book also makes reference to a Kandarian Dagger, but the basement in the Vatican is an impossible mess. Maybe if we had a garage sale or something.”

Many at the Vatican and beyond are aghast by the Pope’s decision to unleash the forces of evil into the world, but the Pope defended his actions today, “I have weighed the risks and have concluded it takes a bad ass to take down a bad ass. And there are no bigger bad asses in the galaxy than the Kandarian demons from the Evil Dead.”

The Necronomicon Ex-Mortis was created from the flesh of the ‘Damned Ones’ and opening it is generally regarded across the multiverse as a bad idea. When a reporter pointed this out to the Pope, he said, “I got this shit, okay, so relax. Portals to the underworld are easy peasy, especially when you have a personal connection to the divine creator. Also, there’s very clear instructions in this book, not only how to summon these things, but how to destroy them as well. Besides, what’s the worst that could happen?”

If the Pope’s plan should fail, his Holiness made a passing reference to a plan B involving a Sumerian God, a Key Master and a Gate Keeper of one Gozer the Gozerian.