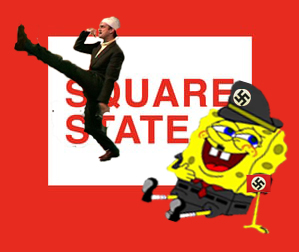 This week’s fascism watch is rather extreme, even by normal Republican ‘standards’. Eighteen states, primarily of the Freedom Circus variety, are pushing a bill that undermines peaceful assembly. Yep, you heard rights, folks …as they vanish. If anything turns ugly during a protest, the organizers—not the Nazi, hooligan Trump-lovin’ instigators—but the organizers are more likely to face steeper fines and charges. And running over protestors is now encouraged, well, as long as they’re libs. Safe Space 2000? Sheriff Joe for President: ‘Carcerations R’ In! If this schitznik passes, our torch wielding, white supremacist friends can crash our parties with more free wheeling, wanton abandon. Gee, why are they trying to tamp down peaceful protests during the Age of Ass-Clown? Hmmm. Reminds me of that old SNL bit: Bad Idea Jeans. Fox & Friends have managed to avoid covering the deconstruction of our republic through the act of asking endless irrelevant questions about unrelated topics. Let’s award some partial credit as they’re helping to create an oligarchy without even knowing what the word means. Multi-asking? So where are their constitutionalists now? Silence of the Lames?

CNN weighed-in on this latest attack on our First Amendment rights:

“So far, lawmakers in at least 18 states have proposed legislation that would make it harder to protest, create harsher penalties for protestors who are arrested, and, in two states, remove liability from drivers who accidentally injure protesters on roadways.”

Whereas most can agree protestors shouldn’t be blocking roads, most of this bill is a Constitutional turd. Founding Farters? Another disturbing affront to our freedoms is the pending SCOTUS decision on unions. This ruling would not only further devastate collective bargaining rights on a national level, but would damage the DNC’s ability to fund-raise during the ramp up to these crucial mid-terms …or, win-win for the intellectually impaired. For the rightwing tridefecta, Trump just passed a law that makes it harder for the government to sue corporations for wrongdoing:

“What it comes down to is the government hamstringing itself from being able to enforce its own laws and regulations, particularly against corporate violators.”

Nothing like feeding more carrion to the Wolves of Wall Street during the age of vulture capitalism. Oh shortsightedness, thy name is Republican. Did I mention banks are 37% bigger since our Too Bigly To Fail debacle? I personally can’t wait for the next collapse and subsequent rape of our collective wealth. 401-KO? You haven’t followed this story? What, too enthralled with your latest conspiracy theory over on InfoWars? Uranium None?

In that same article, Waldman points to Trump’s new appointment and his systematic deconstruction of the Consumer Financial Protection Bureau. Is this revenge for losing the Trump University gig? Don’t worry, if you live in the U.S. in 2018, you’re all honorary graduates of Trump U now. And, if you act now, the president will throw in some choice Kushner Companies real estate in the desert near Qatar! Yep, electing Trump was kind of like hiring a skid row life coach, who didn’t quite make it through meth rehab.

You keep focusing on your constitutional angst regarding some snowflake sophomores, squirreling in their safe space, while your team systematically deconstructs our republic, piece by piece. Please try to notice the second constitutional crisis of our lifetimes, folks, most of you already missed the, post 9/11, abuses. Don’t miss out! Lots of land near Qatar, with choice views of sand! Call Jared Kushner today!

And, of course, one day after I posted this the Republicans are attempting to rollback the last of the Dodd Frank safeguards. Yep. What kind of world do we live in where even Fake News can’t keep up?!

*Hat tip to Craig for sending the first article!