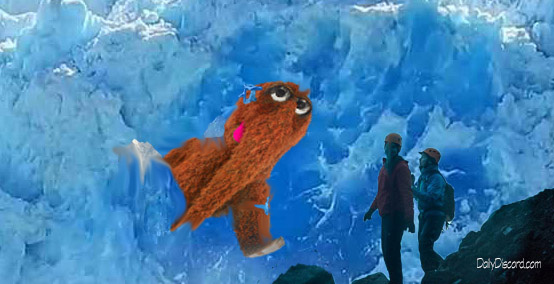 The Frozen North—At the edge of the permafrost region of the Alaskan Arctic Circle-K, just north of the Home Depot, a group of intrepid explorers have discovered the best preserved remains of the elusive Snuffleupagus. Expedition head Dr. Sterling Hogbein, of the Hogbein Institute and Gastropub, told reporters, “This discovery changes everything we know about early Pleistocene Muppets. For one thing, it looks like they could fly short distances and, apparently, they liked to hang out deep inside of glaciers. It also means I never should have prescribed all those injectable anti-psychotics for his friend Big Bird. Oh well, live and learn.” Dr. Hogbein was later found in downtown Anchorage asking locals, “Can you tell me how to get to Sesame Street? No, really. It’s for science.”

Today’s Zyprexa injection was brought to you by the letter Z.

Dr. Hogbein told the Discord today, “Many of the Muppet specimens are harder to find since their migration from PBS to HBO, especially at those monthly rates. In recent years my team has blanketed every urban bakery and cookie shop in the lower 48, but there’s been no sign of this Cookie Monster. Most cities could sustain a population of such creatures, yet only one has ever been spotted. I don’t want to cast Jim Henson in the role of Dr. Moreau, but perhaps these are furry anomalies, created through the genetic manipulations of some evil genius. I believe a DNA sample from Animal could be the Holy Grail of the Muppet genetic code. What is that thing? Is it the missing link between rock & roll drummers and hippies, or between Bigfoot and Grover? Where is Henson’s secret research facility? Does it have a bar? The questions are endless.”