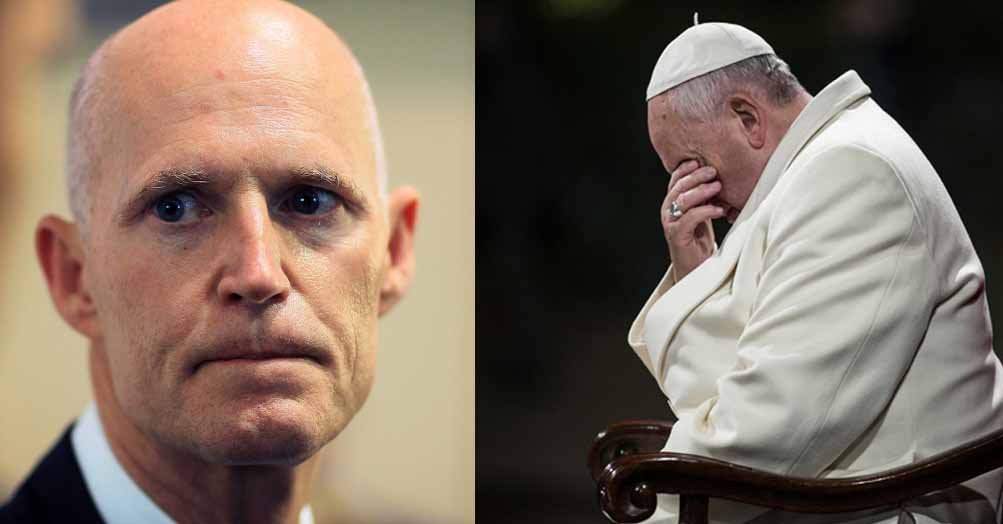 Tampon Bay, FL—Incensed by The Pope’s comments on Climate Change, Governor Rick Scott is now on the warpath. According to the Governor’s orifice, The Pope is in clear violation of his “Shhhh, Don’t Mention Climate Change, Just Keep Building Shit Inland” initiative.

Radio personality, Rush Limbaugh, said, “I believe the Vatican is very close to getting the bomb. And I will have nun of that…Get it? I don’t know about this new guy, Pope Benedict the Arnold. He obviously has connections to liberal sympathizers, who obviously have connections to the Muslim Brotherhood. So do the delusional math, people! Last time I was in church the priest was swinging around this smoking metal ball. That could take out a few rows of pews if weaponized. Hell, if that’s not a smoking gun I don’t know what is. What else is the clergy hiding under those bulletproof vestments? In fact, I believe the Vatican has acquired Weapons of Mass Mass Destruction.”

John Q. republican added, “We need to increase sanctions on the Vatican. We need to stop their overt aggression on conservative values. The Pope met with The Putin recently, so I think it’s a fair question to ask what they were talking about. Are they conspiring against American interests, or, worse, American interest rates? What did the Pope pray, and when did he pray it? Its’ a fair question and, when it’s all said and done, this scandal is going to make Benghazi look like Fast and Furious.”

Governor Scott told reporters, “Not only did his Holiness the Dope break my ‘Don’t Care, Don’t Ask’ approach to climateary issues, he took it a step further by bringing up the fact that man has impacted this obvious warming trend. That’s why I support ‘Stand Your Ground’ laws, because we’re going to lose a shit ton of ground in this state over the next—”

The Governor was then shot and killed by one of his own staffers, who later told police that he was “only following orders.”