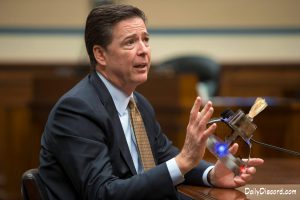 Washington—The intelligence community has continued to work diligently to determine the origin of the “voices” plaguing the president’s age-addled brain. FBI Director James Comey met with the head of the American Psychological Association yesterday and then promptly contacted a FISA judge for a warrant. Mr. Comey told the Discord today, “We need to determine if these messages are the result of a psychotic disorder, or if a foreign government has successfully hacked into the president’s brain. Therefore, I have obtained a FISA warrant to listen to the president’s thoughts. Not me personally, of course, but an appointee. I mean, F-that shit.” Mr. Trump was then informed he would need to remove the aluminum foil from his head—a tactic used to block out these voices—and then don some particularly goofy lab apparatus.

Mr. Comey told the press, “Exactly what the voices in the president’s head are telling him is a matter of national security. We are hearing some very disturbing reports that these voices may be encouraging him to ‘keep up the good work.’ That’s some pretty sick shit. The incoherent way the president is legislating could be the result of anything from subliminal suggestions to a more full-blown neural virus. We have not ruled out the actions of China, Russia, North Korea, Anonymous, or the Public Broadcast System.”

When asked specifically about the concerns over the Muppets Resist movement, the FBI director refused to comment. “This is an ongoing investigation, so I will not release any specifics other than the ones I already just illegally mentioned here today. That is sort of my M.O. at this point. Oh, but Grover was not water boarded 17 times for attempting to scale the White House fence with educational materials. That is an exaggeration.”

In related news, Muppets Crazy Harry and Animal are being detained at LAX airport for reasons unknown.