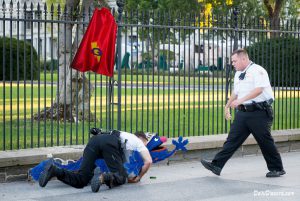 Washington, DC—The Secret Service has foiled the fourth attempt to breach the White House grounds in so many weeks. This latest incident occurred Sunday afternoon and involved the well-known children’s icon, Grover, of Sesame Street fame. Grover was arrested near the south entrance of the White House donning a cape and a plastic knight’s helmet. White House spokesperson Sean Spicer told the press, “Grover was arrested while attempting to climb the fence armed with volatile educational materials, educational materials deemed helpful to children.” Grover’s friend and acting attorney, Big Bird, of Fozzie, Fozzie, Fozzie, Big Bird and Elmo, received a frantic call from Grover yesterday, “They are waterboarding me in the Lincoln room (glug, glug), thank Henson I don’t require air to survive! (glug, glug). Send Muppetnator back in time to kill Cheney (glug, glug, glug).”

Witnesses to the arrest claim Grover was shouting, “Don’t taze me, bro, lock her up, and I don’t breathe” repeatedly while being hauled away. Although it’s purely conjecture, friends of Grover believe he was motivated to act after Trump unveiled his plans to defund the Public Broadcasting Company, which would almost certainly impact the Muppet’s livelihood. Sesame Street spokesperson Frank Oz is downplaying rumors that this is only phase one of the Muppet Resistance, “Sure, the authorities discovered Oscar the Grouch’s garbage can lid was rigged with explosives, but it’s always rigged with explosives. He really hates company. And sure Ernie was arrested in the lobby of Trump Tower yelling ‘Allah Akbar’, but Bert is always getting him to do stupid shit.”

The whereabouts and the health of Grover is unknown at this time, but unconfirmed reports suggest he released one statement to his girlfriend, that hot hippy Muppet, “I’m sorry you had to find out this way, babe, but I’m Super Grover!”

Trump is already fighting back as fellow Sesame Street peeps Maria, Luis and the Count von Count were detained by ICE today and they are all slated for deportation by the end of the week. Witnesses to these arrests claim as the Count was being led away, he said, “1, 2, 3, three immigration officers! Ah, ah, ah.”