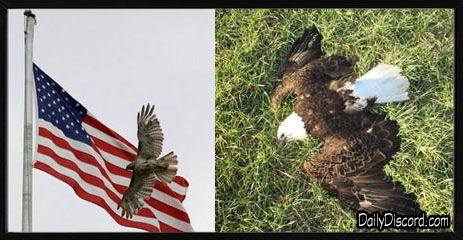 Federalsburg, MD—Thirteen bald eagles were found dead in eastern Maryland today. Some are theorizing this was a suicide pact as witnesses describe the birds as “flying directly into American flags like kamikazes.” It is believed one eagle from each of the original 13 colonies flew to Maryland as part of a suicide pact to protest Donald Trump’s current success in the Republican nominee primaries. Either that or the eagles decided they couldn’t go on without Glenn Fry.

The Discord’s medium, Madam Schwarzbaum, explains, “What’s clear about this incident is that the spirits of 13 key colonialists inhabited these eagles, flew to Maryland, rendezvoused there, and then offed themselves.” The Discord psychic claims to have confirmed this by using crystal aura spectrometry. “Clearly this is a sign that our Founding Father’s believe The Donald is an asshole,” added Schwarzbaum. “I don’t know why all the theatrics when they could have just contacted the usual way, through Ouija, tea leaves or Verizon.”

The Daily Discord came very close going with the death of Glenn Frey link, but then we reread Tony Ballz’s article and scrapped the idea (before making up something else).