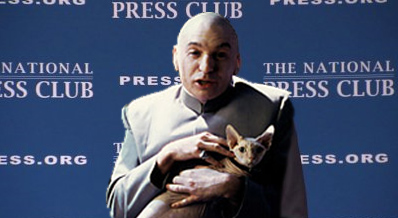 Secret Moon Base—After much consideration, the notorious Dr. Evil is considering a run for the highest office in the land. He is mainly joining the race because he believes the current frontrunners are all “A-holes”. Price is apparently no object for the super villain as he told the press today he is prepared to spend “gazillions” of dollars on his presidential aspirations. Dr. Evil said, “I will fund my own campaign, because you don’t want to see an evil genius tied to a lobbyists. It’s not fricken’ pretty.” He then personally thanked the “little people” for passing Citizens United and added, “Who do I make the check out to?”

When reporters questioned the viability of Dr. Evil’s chances in a general election, the doctor responded: “This wasn’t possible three months ago, but look at the collection of Bond villains leading the pack?! I see most of these A-holes at the annual super villain retreat in Kissimmee, Florida. I know, I know, I’m trying to have the venue changed. But why settle for semi-evil, America? I can trump that bastard, easy-peasy.”

When asked about policies, Dr. Evil said, “Taxes would actually drop under an Evil Administration. I will only be taxing enough to hatch my diabolical schemes. On day one, I plan to use a death ray on ISIS and then build a Wall of Incineration along all of our borders.” When asked about the Affordable Care Act, he said, “Obamacare will be dismantled brick by fricken’ brick—except the Death Panels, of course.”

People are already buzzing about a possible running mate. When asked, Dr. Evil said, “I like Ben Carson. I could call him Mumble-me and we could run as Dr. Evils. All of the republican candidates would do nicely, as would Hillary. I would prefer to keep it in the family, but Mini-me would probably trigger WWIII. He’d probably start humping Vladmir Putin’s leg right in the middle of the first meeting, so Mr. Bigglesworth is an early favorite.”