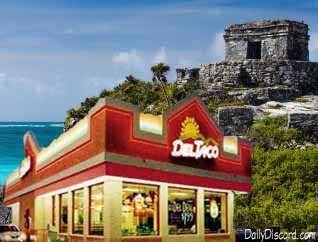 Peru—Many in the country of Peru are furious with the construction of a Del Taco in the Middle of what many believe is an important Mayan archeological site. The CEO of Del Taco, Paul Murphy, was quick to respond, “Look, the Mayans already ruined the place, right? The operative words here are ‘ruins’ and ‘abandoned’, so placement of our facility at this location should only increase property value.”

The Mayans all but disappeared around 900 AD and lost any legal rights to the land in the 70s. There are many theories surrounding their disappearance, from Ancient Aliens to ancient value menus. As captain of team Search Truth Quest, I am not convinced they’re truly gone. Sure we haven’t seen any Mayans around in well over a thousand years, but the Aztecs were spotted as recently as Scooby Do and the Aztec Tomb.

Meanwhile, Ed Hackbarth and David Jameson opened the first Del Taco in Yermo, CA in 1964. Of course, we all know Jameson then moved to Ireland to create bigger and better things, like fatty livers. The efforts of the two brothers has now culminated in an expansion of their franchise into South America.

El Presidente of Peru (not to be confused with the beer), Ollanta Humala, is less than pleased. He claims he was drunk when he signed the contract. “This isn’t even the worst of it,” said President Humala. “I’m furious they put a Carl Jr.’s right on top of Machu frigg’n Picchu…when I was holding out for a Chick Filet.”

Locals have mixed feelings about the situation. Mateo Diaz said, “The Human Sacrifice Asada fries totally rock, but if it’s made with real Mayans, then we’re talking well passed the sell by date. ”

Another woman, who preferred to remain fictional, said, “Eating food like this once a week can be part of any effective detox or cleanse regimen. It works faster than Dulcolax and juicing combined. Ask your doctor if the Del Taco Mayan Mudslide, is right for you.”

*Void where prohibited. No really, you won’t have a choice.