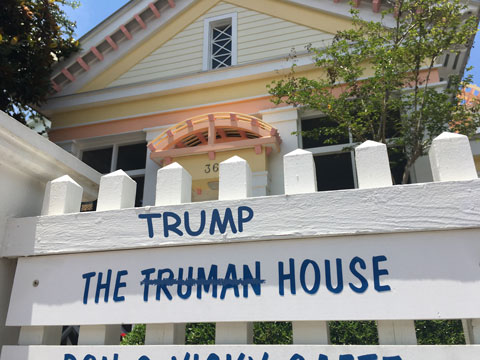 Seahaven—Today the famed television mega-producer, Christof, of The Truman Show fame, admitted that the last three years of Donald Trump’s life have been the next of his epic reality TV series. In an interview with The Daily Discord’s own Cokie McGrath, Christof stated, “My last foray involved keeping an individual, Truman Burbank, isolated in a bubble and making him believe that the environment around him was reality. This time I have taken an inside-out approach to that premise. We’ve targeted an individual from reality TV and created a fake reality out of him. The Truman Show started with the birth of the protagonist. This time I didn’t think that the back-story would be that compelling, although there is a niche market for those fascinated by the causes of sociopathic behavior. Maybe I’ll create a spin-off. Anyway, I didn’t have that kind of time to cultivate the requisite fame required to create the setting.”

The wildly popular Truman Show ended in 1998 and it was broadcast 24/7, non-stop for 10913 days on a single channel in 230 countries. It involved complex sets and visual effects, a vast network of cameras and a multitude of actors to create the artificial reality. This new incarnation required only a single narcissistic dolt, or Individual One, and a slight-of-hand election. The cameras are provided by the press, the characters are real and the show is broadcast 24/7 on every channel in every country. “Last time I had a character living in a fake reality being watched by the audience,” said Christof. “This time I have gone way beyond that. Now I have the entire world living in a fake reality formed around the lone character. With the evolution of the internet and the advent of social media, the audience is not just living in the cultivated reality but is actually contributing to its richness and self-perpetuation.”

When questioned as to the direction and potential duration of this new reality, Christof responded, “When I created Seahaven I had no idea when, or even if Truman would ever figure out the reality of his existence; that show had an almost 30 year run. It’s the same with Trump. It looks like a large segment of the audience believes strongly enough to make it last forever. However the rest, and the behavior of the lead character himself, seem to be causing this incarnation to collapse in on itself. I fear premature cancellation and/or global annihilation.”

“Enjoy it while it lasts,” encouraged Christof. “And don’t forget to take advantage of the merchandising. While everything seen on The Truman Show was for sale: the clothing, household items, cars and even the houses, the only things for sale here are presidential influence, our future, our values and the very soul of this country. A small price to pay for art.”