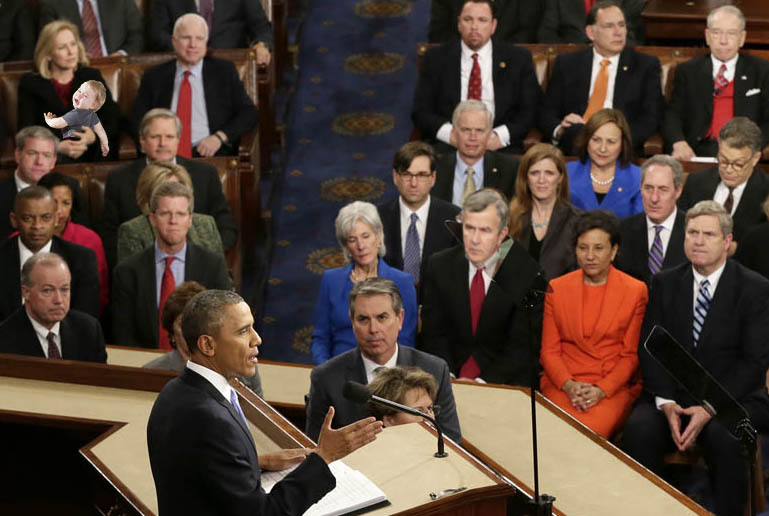 Washington—A child, who apparently wanted “walkies”, became a key distraction last night during President Obama’s 8th and final State of the Union Address. Initially the President tried to make light of the situation, but the growing disruption caused him to lose his train of thought several times and eventually his patience. The President initially tried to make several jokes, some which garnered laughs like, “That kid is more mouthy than my VP” to other more offensive comments, such as “This is why I’m pro-choice, people.”

Rep. Joe Wilson of South Carolina shouted, “You cry!” in what many are calling an encore performance for his “You lie!” moment during Obama’s 2009 SOTU address.

Congress woman, Linzy Stratton (R-MI) later told reporters, “I couldn’t get a baby sitter and our fascist president made this speech mandatory. He says he’s for women’s rights, but he’s just another misogynistic asshole. Bad enough Congress was expected to work almost 132 days last year…and I’m not even from this state! Washington is a state, right? Oh, and then they sit me right next to John McCain. I agree with Trump on this one, I prefer people who avoid getting captured during wars.”

Senator John Q. Republican was quick to condemn the president’s handling of the situation. “How can he be expected to handle Putin and ISIS when he can’t even handle a toddler? He totally lost his cool out there. If this were the Bay of Pigs we’d all be glowing by now like a Fukushima firefly hooked on phosphorous.”

Both Sean Hannity and Rush Limbaugh have already booked the toddler on their respective programs.  “We need more young people willing to speak out like this,” said Hannity. “Speaker Ryan should have followed that young Republican’s lead and dropped a deuce right in the middle of Obama’s Guantanamo rant. I would have. Hell, I did!”