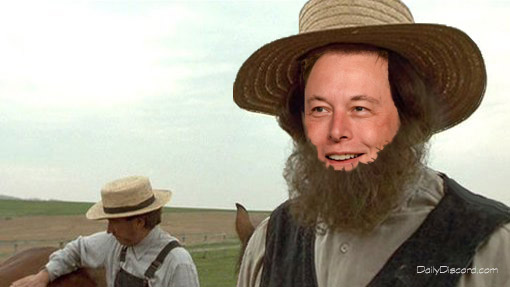 Lancaster, PA—Shortly after SpaceX announced its intention to head for the red planet next year, the CEO of the company, Elon Musk, inadvertently revealed his Amish heritage. It all started when friend and fellow space pioneer, Richard Branson, invited Musk to his private island, but he declined the offer, saying, “I have to go back home this weekend to help my friends build a barn.” Later that week, this image surfaced showing a bearded Musk, engaging in decidedly Amish activities. Daily Discord’s Cokie McGrath asked Musk in an interview, “Are you, or have you ever been an Amish person? In which case, are you a Mennonite or a Womannonite?” Musk avoided the question, which spurred Senator Lindsey Graham (R-SC) to ask, “What did he build and when did he build it?”

Weird Al Yankovich later told the press, “When we shot my music video, Amish Paradise, Musk just kept hanging around the set all day. I thought it was kind of weird at the time. Now it all makes sense, after all, his first name is Elon. It’s like, why were we all surprised when the leather-clad wearing lead singer of Judas Priest turned out to be gay? The signs were everywhere. I don’t think being a space pioneer and an Amish person are inherently contradictory. Is there cow tipping in space? Maybe we’ll find out.”