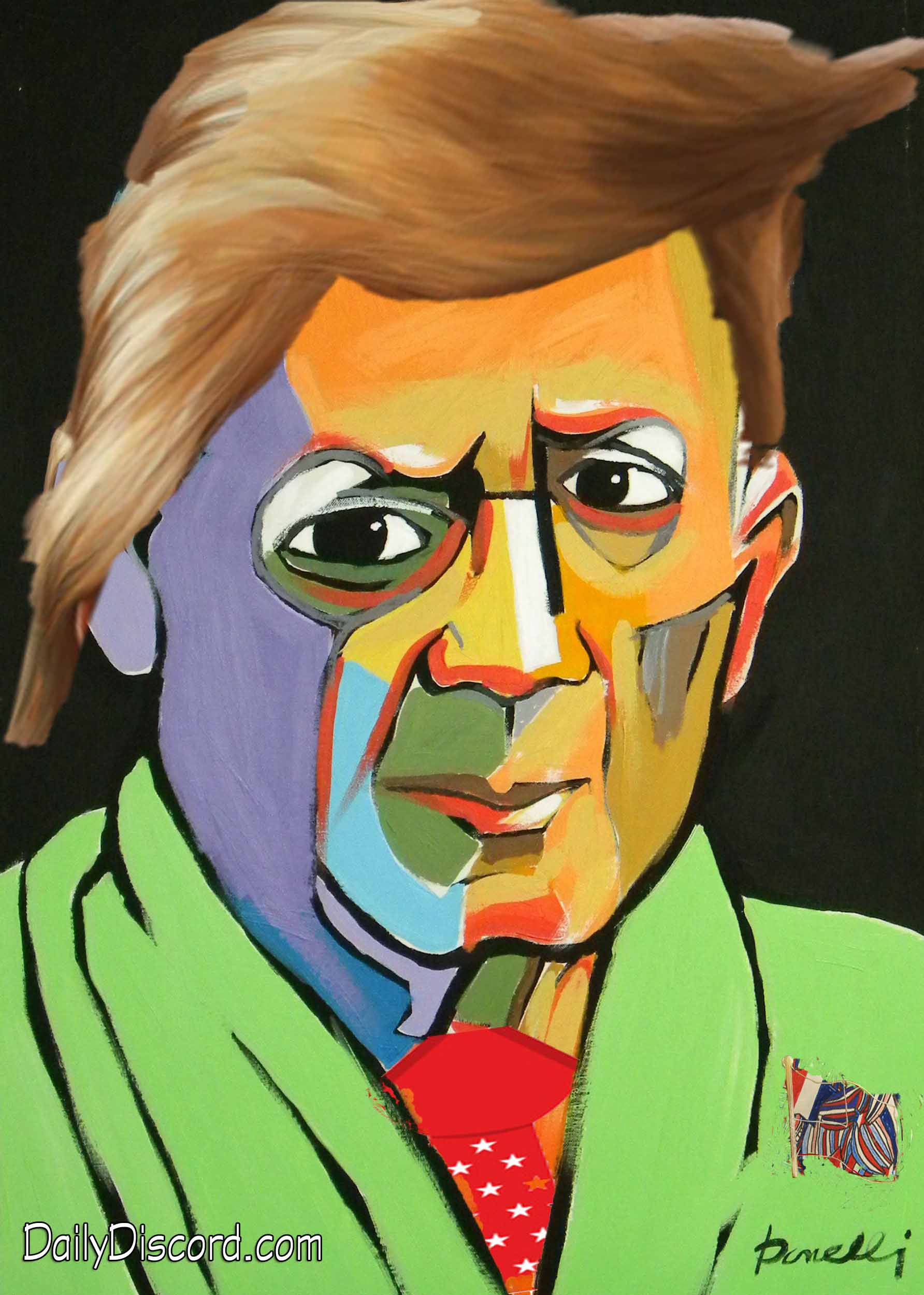 Republicans want us to believe they’re the common sense people, and that they alone know how the ‘real world’ works. They then proceed to elect the two most incurious presidents in our nation’s history, consecutively. Doesn’t Occam’s razor suggest something different? My blogvesary, Pokey, doesn’t think so, and he also feels I haven’t offered enough historical context for my arguments. Conservatives apparently need a genre-specific landscape painted for them. Nopointillism? Why would anyone need more brush strokes in the USA today? Perhaps my friend thinks Trump is God’s instrument. Yeah, well one man’s instrument is another man’s tool. In lieu of addressing the political challenge of our time, namely his choice for president, he continues to attempt to reanimate a series of zombie scandals. As for the actual bona fide scandals of today, to quote my friend Ling Carter, “If you can’t connect these dots, we’re going to need to order some larger dots.”

During George W. Bush’s tenor I focused on approximately ten major points/scandals. I’ll spare you the recap, suffice to say all ten proved legit. This is why historians ranked his presidency among the most rank in history. Over those eight long years, my friend either misunderstood the gravity of the situation, or minimized it. In a number of countries, today, our 43rd president would still be arrested at the airport for his war crimes. Two in the hand is worth one Bush on the tarmac?

And by comparison what exactly is your score, Mr. Pokey McDooris? At this point you must have gained some insight into your own lack of insight. The noise from you and your ilk invariably ends with someone in authority, usually a Republican, finding no wrong doing. Although, it does tend to take several investigations to reach that profound conclusion. Delayed adjudification?

You want some more context? Here’s the basic GOP-scandal terminus:

I’m not saying there’s nothing here, but, as compared to Bush and the Trumpster, There.Is.Nothing.Here… Meanwhile, my similar list for Bush atrocities would read: “Discovered to be true, yet never fully investigated, or prosecuted.” Seems fair. In the past, what investigation have I ever suggested that proved totally unfounded? On the flipside, what have you asked to investigate that has any merit? [Insert Pokey’s Hillary email issue comment here.] I have already given you that, thus your 10% score.

Hint: that’s not a good score.

What exactly is the problem here? Conservatives refuse to give up on any of their falsehoods, regardless of how trivial. Where the Clinton’s are concerned, they make Captain Ahab look like the Dude. Prior to the big Hillary email bust, did any Republican ever say, “Check her server! She’s mishandling stuff!” Of course not, which is why I have an equal disregard for anyone in the age of Jobs and Gates who failed to properly install their Kaspersky Russian spyware. Ha! I feel safer already. Of course, my organization would have simply fired the IT guy (no offense, Crockett. Actually, your days are numbered!).

The average Republican always seems to know slightly less than their favorite entertainment anchor, yet slightly more than their investigatory counterparts. They have 24/7 exclusive front row seats to the real facts on the ground. Umm, it seems your ‘facts’ are right by that other steaming pile on the ground. [Please curb your Foxal Matter.]

The tragedy is how real shit was happening during these mindless diversions. I know because I was trying to cover them. There was never an investigation on the dubious lead up to the Iraq War. Couldn’t we go back in time and spare a single Benghazi investigation for something relevant? And today, I can see beyond the damning conclusions of the Mueller investigation to Kevin Nunes’ criminal enabling trial. Whereas I can see tomorrow rather clearly, my blogvesary still seems a little hazy on yesterday. Speaking of Yesterday:

“Collusion is, something started with some shady biz, when Trump paid a Moscow gal to take a piss, oh, I believe in analysis.”
–Lennon, McCarthy & Stalin

As you and your ilk perseverate on endless waves of either fake news or scandelletes, it doesn’t change the fact that people you tend to elect should probably hang. Trump represents a profound threat to our democracy, beyond even ‘Dubya’s executive expansion and butchery. At the onset of the Reign of Trump, Robert Reich noted the seven hallmarks of a tyrant. How did you miss all seven?

And the biggest actual Obama scandal goes to (drum roll) …Obama’s cover up of his predecessor’s war crimes.

The day Colin Powell stepped into the UN with his little vile of joy, I said ‘he would rue this day’ and, of course, he did. And the day John Kelly became Trump’s Chief of Staff, last August, I posted this on the Discord about his imminent rueing. Last week he confirmed this with, “God is punishing me.” Each day this spoof news site musters some insights, but Republicans as a whole seem devoid of this ability (the W left off for your protection). I have challenged you to use our archives to find some of your own, or some other Republican’s, insight. I know, that’s become a bit of an oxymoron.

This is why you should avoid taking any of these Mueller bets that are currently on the table. I know, you’re calling your bookie right now and betting everything on the dossier in the third. Here comes Salacious & Unverified on the outside rail! My predictions were all pretty damned accurate under Bush, and Trump is easy-peasy by comparison. Meanwhile, next to nothing you’ve been ranting about over the decades has amounted to anything. That’s a damning indictment in and of itself. Trump arguably committed more atrocities this week than both Clintons have over their entire careers, life, kin’s life, ancestry.com, species in general.

The intelligence community was wrong on Iraq WMDs, but that didn’t stop Bush from using that information to invade the wrong country. The intelligence community was right about Russian meddling into the 2016 election, but that didn’t stop Trump from ignoring it outright. The only thing consistent in my lifetime is the Republicans’ ability to get shit wrong.

Our nation is facing some real problems, and most have either been created or exacerbated by our friends on the right. Stop doing the bidding for morons, Poke. Have you even done your homework yet? Have you sought out the last of the Republican intelligentsia? Remember the old saying, you don’t know what you’ve got ’til it’s gone? …I don’t remember that, so I guess that’s gone too. But you’ve been shown the media bias chart from my last feature, so let’s see if you can pick up the ball and start running in the right direction this time. Think of it as your road map back to reality. Read it, embrace it, and God speed.

Aaaand …today, as I finish this post, we find Trump is promoting Gina Haspel to head the CIA who “tortured some folks” and then destroyed evidence. If Obama had done his job she would be in jail (if she really participated in this). Yep, it will always be pizza-gate vs war crimes. Next time maybe try a meat lover’s scandal.