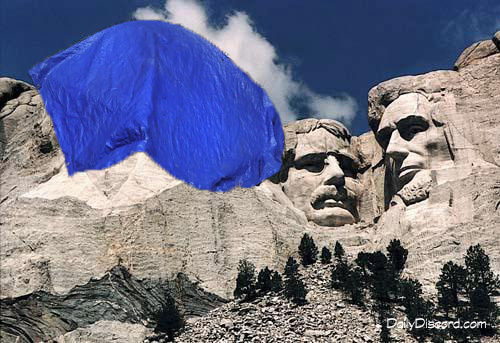 National Parksylvania—If the looming stalemate in Congress shifts to a partial government shutdown that could prove a worst case scenario for our national parks and memorials. Park and memorial services across the country would need to scramble to make only some of their featured landscapes and monuments available to the public. There would be strict congressional guidelines involving access, fees, and available vistas. For example, if you climb into the Grand Canyon and then the partial shutdown hits, you would not be allowed to climb back out. In Wyoming at the Grand Teton National Park, only one of the Great Tits would be displayed. Even more disturbing, the necessary geological mastectomy to remove the other mound may tally in the billions. At Yosemite National Park you can get into the scenic valley, but the famous Bridalveil Falls will be turned off with a giant spigot installed during the partial government shutdown of 2013.

Jessie Williams shared his ordeal during the last shutdown, “Back in 2013, I walked all the way to the Phantom Ranch at the base of the Grand Canyon where a park ranger told me to sit tight until the government shutdown ended. It all worked out. We just ate a nice Republican couple while we waited.”

The Interior Department is hoping to keep national parks “as accessible as possible …at least from space.” For the last shutdown the department asked everyone in the International Space Station to close one eye when viewing the United States from orbit. “This time we might just wave that restriction,” said Interior Department head, Ryan Zinke. “We will also be allowing full access to the remaining Civil War monuments, which are all in one closet now, and that museum that has all the heads and arms from the statues from all those other museums.*