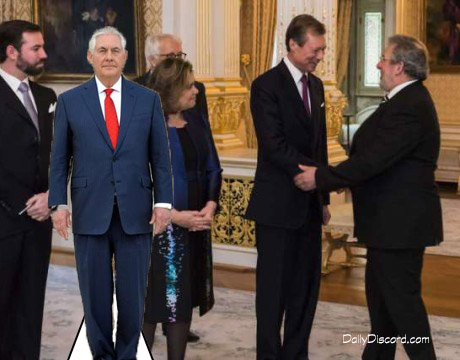 Tweet Tower—The White House is downplaying the replacement of Secretary of State Rex Tillerson with a cardboard replica. Many believe the president does not wish to emphasize the diplomatic aspects in his already depleted toolkit. Press Secretary Sarah Huckabee Sanders said, “When the big-oil-diplomat fails, it’s time to bring in his cardboard counterpart. The president knows that diplomacy is often not the answer on the world stage and this will save both money on payroll and on related security issues. If cardboard cutout Rex Tillerson is shot or captured by Jihadists, the joke will be on them.”

Rex Tillerson is maintaining, “All is well. There’s nothing to see here. I am still Secretary of State, sort of, and this is par for the course in Trumpville. I feel confident the cardboard cutout version of myself will be as, or even more, effective than I have been in the capacity as Secretary of State, sadly.”

President Trump is denying allegations he has similar plans for the EPA and the FDA heads, but tweeted today:

The new Secretary of State declined to answer any of our questions, despite holding a microphone in front of his flat fossil-fuel face for nearly an hour.