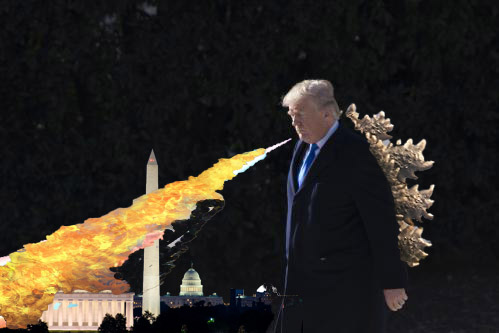 The liberal anxiety surrounding a successful Trump presidency is creeping into our comment threads lately. You don’t even want Trump to succeed, do you?! True story. Why would we ever want more people like him in power? The liberal intelligentsia is focusing on the carnage, post Trump’s downfall. Knowledge, like the GOP itself, is a burden. There’s a non-published Zano article in the archives that weighs all the potential outcomes of a Trump presidency and, yes, a triTrumphant term ranked rather low on the scrotum poll. What?! A Trump win is not going to happen, which is precisely why that post languishes in the Discord draft folder, right alongside my debunked theory: Is The Dark Web Entirely Comprised Of Dark Matter? Sorry folks, but Donald J. Trump is poised for a mega-fail, and sooner rather than later. A full Trump victory lap in 2020 is about as remote as the hut of an Aleutian tribesman suffering from social anxiety.

My father and I disagreed on this point last November. Having been handed a strong economy, he felt Trump could coast to the midterms on Obama’s coattails. After all, Bush pulled off a similar a feat, but things are simply not as stable as they once were and the GOP-types are accelerating their ignorance like a CERN particle on meth. Thus my prediction that Trump’s own incompetence would start to mitigate any good economic fortunes during his second year in office. Let’s say somehow he actually keeps things purring for a bit longer, what might that mean? It’s about priorities and Republicans don’t seem to have any. Do we want unsustainable short-term gains to outweigh our country’s prestige, influence, safety, air, water, ecosystems, bond-rating, currency, rule of law, and future? If you answered yes, you might be a Republican. Ask your doctor if the Discord version of the Montreal Cognitive Assessment Test is right for you. What year is it, eh?

The tax cuts are a bit diabolical in that they give some of the non-Warren Buffets of the world a tax break, but these middle class breaks peter out faster than Speedy Gonzales at a border crossing. This is designed to create some initial excitement for the ill-informed but, like everything else Republican, it’s all just a red-state herring. Will this tactic buy our Pretender in Chief enough time to avoid a midterm rout, which, in turn, might delay impeachment proceedings? Meanwhile, Republicans are essentially gambling our environment, our benefits and our deficits on Reaganomics, an economic model with a worse record than Garfunkle’s solo career. The Sounds of Supply-side? Hello deficits my old friend?

Trump is on borrowed time, with borrowed money, and if he stays in power long enough a crisis will no doubt occur, of his own making or otherwise. Such a situation would allow him to expand his totalitarian tendencies. With crisis comes despotunity? As it turns out, you cannot run a complex government brandishing a middle school level of consciousness powered only by an amygdala. Nothing good can come from this, even if economic indicators hang tight for awhile. Lest we forget how long it took to clean up the last Republican mess.

Meanwhile our freedom-touting Foxeteers are giving this sociopathic administration free reign over our republic as well as the Constitution they claim to hold so dear. The tax plan is going to be a long term disaster and, in 2018, a card-carrying Republican with a clue is rarer than a Jewish deli in the West Bank. Matzoh bomb soup?

Now, with the tax plan in place, the systematic rape of our middle class can now commence! Jonathon Chait’s Trump summary nails it:

“The federal government will no longer withhold subsidies from for-profit colleges that fail to give their students meaningful skills or educations and saddle their graduates with overwhelming debt. Restaurant owners stand to legally take for themselves tips intended for their servers. Financial advisers will be able to knowingly steer their clients toward investments that benefit the adviser’s firm but not the client. Environmental Protection Agency investigators must now obtain permission (from their fanatically anti-regulation administrator’s office) before even asking companies to track the pollutants they emit. Nursing homes and banks will be allowed to force their customers to sign mandatory arbitration clauses that leave them unable to sue if they are abused or cheated. And on and on.”

Hint of the Day: unless you’re a member of the one percent, please assume the position.

If Trump kicks ass economically for any meaningful length of time, the deplorables will become the incorrigibles. Think about it, Republicans still assume they’re right about stuff …in the 21st century …with zero supporting evidence. Could you imagine if they actually received positive data for a time? Unpresidented? They could care less if this occurred under a sociopathic and short sighted man-child, or what long term negative implications their policies might cause. Complexity is simply not their thing. Unintelligence briefings?

Sadder still, Republicans are actually making the liberal intelligentsia dumber by dragging us down to their level. Think of all the time spent on teasing out any meaning to Benghazi, Fast & Furious and all those other false scandals designed to keep America deaf, dumb and blind to the real dangers. Selective hearings? Republicans are incapable of understanding the past, let alone capable of predicting the future. They remain the only group in the industrialized world with a hindsight of 20/40.

In reality, our country is facing either a long decline (courtesy of liberal leadership), or a steeper plunge into the economic abyss (courtesy of Republican leadership). History will likely credit Obama with saving the auto industry and the GOP with saving the autocracy. Tyrant Lives Matter? Republicans believe that by bringing back the tenants of a capitalistic past that never existed, on an economic model that never worked, they can pave our 21st century streets with gold that no longer exists.

Thanks to both parties the ‘too big to fail’ companies are now 38% bigger and the same Wall Street sleaze balls are up to their pre-2009 antics. Wolf of Gall Street? For the next collapse up on the docket, there will be no bailouts and our currency and our bond rating will fold like a cheap suit. And, having played our last hand this badly, we deserve everything we get. We can also look forward to being added to Trump’s illustrious list of ‘shithole’ countries, right next to Agrabah, Nambia and Normay.

3 comments for “What Liberals Fear Most Is A Successful Trump Presidency, And Rightly So”