Does Donald Trump represent some political aberration, or is he fast becoming the new abnormal? Republicans themselves are certainly downplaying the president’s odd behaviors, mannerisms, fits and tweets. The reason? It’s the parallel downward tracks for both our president’s cognitive health as well as the Republican collective as a whole. There is simply not as much distance as there should be between Trump’s level of consciousness and the average Republican voter. Is there even any room left in their tent for complete sentences? Neurobiological explanations are starting to surface that offer clues as to why conservatives can’t seem to process information effectively. Meanwhile, the last of the rightwing intelligentsia is pulling an Elvis. Darryl Issa (R-CA) marks the 30th Republican retirement, and apparently the remaining brainiacs are full-blown insomniacs. Trump and Hannity reportedly get very little shut-eye, so they’re probably actively hallucinating during their important coaching sessions. Going down in a blaze of auditory? Meanwhile, Trump is the first president in history that dementia might actually help his legacy. Good thing we didn’t go with the competent woman with that terrible cough *cough*.

A recent study suggests both sides of the political aisle are biased toward information that supports their respective worldviews. This is not news, incidentally neither is Fox. To some degree we all hear what we want to hear. But, today, courtesy of better brain imagery technologies, researchers are starting to explore the specific neurobiological underpinnings of political affiliation itself. MRI research suggests significant differences in the decision-making areas of the brains of Democrats and Republicans:

The left insula and the anterior cingulate cortex, which libs apparently employ more during decision-making, are associated with emotional control, executive function, and greater cognitive flexibility [1]. This study is essentially suggesting that when faced with a tough choice, liberals employ emotional-regulation and reason while Republicans remain more fear and emotion driven.

Shock poll: no one shocked by this.

So liberals use the higher executive function when ‘Deciderin’ and Republicans rely on their Gutfeld reactions. Sorry. These differences determine party affiliation an astounding 82.9% of the time and converging studies have verified these results. Fear not amygdala users, for this same phenomenon will allow you to dismiss this as fake science. Fox & Phrenology?

“The anterior cingulate cortex helps to decide which patterns are worth investigating and which ones are just noise. If your brain assigned relevance to every detectable pattern, it would be pretty problematic.”

—Chris Mooney (Mooney is a neuropolitical guru and writes for Slate as well.)

Houston, we have the problem! This isn’t limited to neural activity and blood flow, there’s actually brainular structural differences here. (Yes, brainular is a word.) This further supports a main premise of mine, namely, how Republicans seem to respond adversely to the common fact. The right-wingers tend to rely more heavily on the primitive limbic system for guidance when problem solving. Sometimes it’s good to let the Neanderthal part of us do the heavily-lifting, ummm, except when weighing potential nuclear war.

Conservatives also assign equal or more value to any given pattern based on party over reality. Benghazi over the Iraq War, the Russian-dossier funder over the dossier’s actual implications. The examples are endless. They pick any pattern that suits their needs and thus never see the Forest for the Gump. Shithole countries happen? This is why Brietbart, AM radio, and Fox and Friends are so effective at diverting attention toward infinitely less relevant ‘scandals’.

The main character from Wall Street, sociopath Gordon Gekko, was named after a lizard for a reason. But, hey, the limbic system was really cutting edge brain physiology, at least back in the Devonian period. Remember the four Fs from your psych class? The four Fs certainly cover Trump’s foreign policy options:

Do I cancel the London trip and avoid the next press conference?

Do I make fun of it, and then nuke it?

Do I grab it by the pussy and then bugger it?

Or, do I just order more McDonalds?

Somehow these four responses resonated with the Republican base last November. Hmmm.

Hint: They buggered it.

This theme has not gone unnoticed over the years here at the Discord. 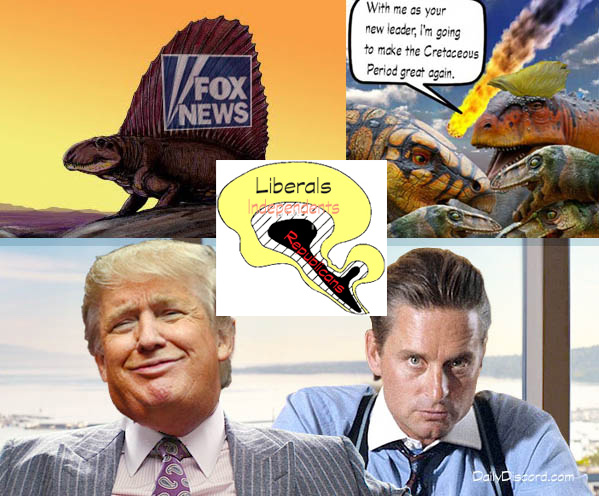 So Republicans rely on the amygdala, but what’s the difference between the left and right side of this structure?

“Using reappraisal strategies—sometimes thought of as ‘intellectualizing’ or cognitive reevaluation—activated the left side of the amygdala, while emotional suppression of visible behaviors and feelings activated the right side.”

So the right side of the Republican amygdala is the busy beaver, working overtime to represses logic in favor of emotion. Angry Beavers? [Winslow: Coincidentally a team in my hockey league] Another study shows how a hyperactive amygdala is associated with an Axis II diagnosis, which further supports my claim that the Republican brain is slipping toward sociopathic tendencies. Here’s my 2013 Republican diagnosis:

Research is starting to support my Axis I Dx, and the election of Donald J. Trump is supporting the Axis II part. Can you fear me now? If not, then why is your president matching my diagnosis …years later …to a tea party? I know, I know, your amygdala is showing again. But wow, I was waaaay off on my Global Assessment of Functioning score. It should be the full Bo Derek at this point, aka a 10. This shockingly low score will afford any Republican instant access to any psych unit in the country …that is no longer funded under your latest budget. Simply show your voter registration card and party affiliation at time of admission. If left unchecked a political party with this horrific scorecard will destroy the globe and all its trotters, one tweet at a time. #Oligarch Lemon?

Here’s the big question, what can we do with this information? At this rate, my ‘incurable’ premise is sadly intact, especially when one considers how cognitive and narcissistic disorders don’t generally respond well to known therapies. Conserversion therapy? This does not bode well for our country’s future, thus my own diagnosis of Pessimistic Personality Disorder NOS. Do I think everyone who votes Republican is incurable? Hell no, but how do we nudge some of them back from the bogus abyss?

Researchers are all pretty clear that even these rather robust brain-imagery findings do not prove causation. So, yes, I’m jumping the gun a bit, but this may just explain why they’re always jumping the shark. Do you have a better reason why ‘Republican thought’ has become such an oxymoron? The right’s position on any given topic really does seem devoid of any and all complexity. During any given news cycle their view can typically be reduced to one debunked Fox News talking point.

When integralists like Ken Wilber keep insisting we pack the best parts of each level of consciousness for mankind’s evolutionary journey, the 21st century Republican package is where his theory falls flat for me. My review of Wilber’s latest book here.

Certainly no one is saying there are built-in cognitive limitations to the Republican brain, but studies suggest neuronal activity is linked to increased brain development, aka use it, or stay rotten to the cortex. Studies suggest neuronal circuitry in the neocortex must be active for growth to occur. It’s neuroplasticity vs guanofoxicity. Science will continue to hone-in on the details of the neurofoxic consequences of the ongoing Hannitization of the Republican brain. What to do about their inherent shortcomings is another matter entirely. It is my hope that people with dynamic dendritic growth in their frontal lobes will consider voting next time.