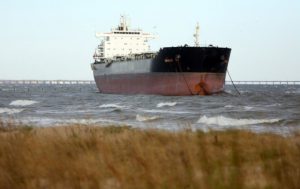 Chesapeake Bay—A Russian freighter, the Любовь Путин, was seized by Coast Guard personnel earlier today in the Chesapeake Bay. The ship, which hailed from Moscow, was reportedly full of artificial credibility ranging from supportive fake news, to Trump achievement ribbons, to trophies that say ‘Everybody Gets a Trumpy!’ Many are concerned this only increases the perception and likelihood of pre-election collusion between President Trump and the Kremlin.

White House Press Secretary Sean Spicer told the press today, “President Trump wants to inspect all of the items from the ship personally, because he is launching his own investigation into this very important matter. He then read President Trump’s related tweet:

If you could drop the ship’s cargo over on the south lawn of the WH that would be great! #ThxCoastGuard!

Meanwhile, President Putin was initially denying the ship was even Russian. “That is a strange dialect, perhaps the ship is from Belarus. Those bastards are defiantly colluding, and what not,” said Putin. “When it was explained that the ship’s name translates literally as, Love Putin, the President of Russia said, “Fine. We tried to put a picture of Trump’s credibility on the back of a milk carton, but no one has ever even seen Trump’s credibility. We have no idea what we’re even looking for. So I resolved to smuggle him some credibility in a boat. But the boat was captured, and now I am sad for my Глупо American comrade. Oh, and remember our deal, my little Мокрая курица, or I will be sending over some golden WikiLeaks, you will find a pisser.”