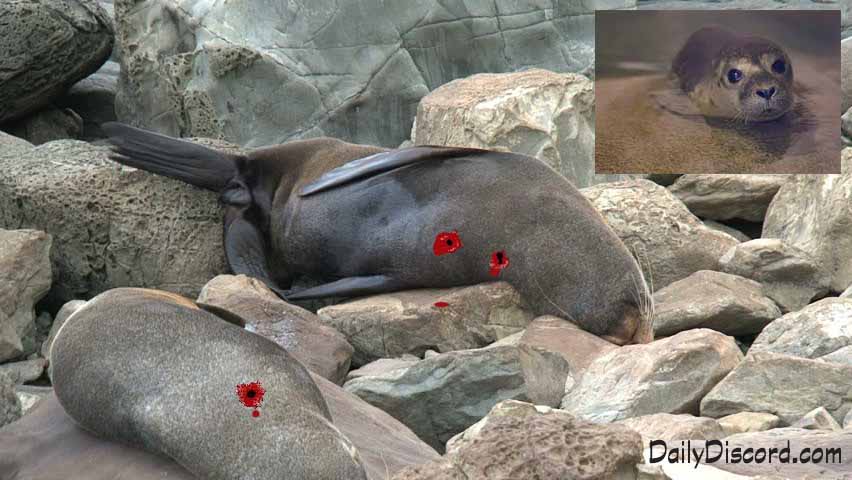 Cleveland, OH—High school sophomore, Josh Milgram, drank three Mad Dog 20/20s during a class field trip and decided he wanted to walk along the railing at the Cleveland Zoo’s seal enclosure. Within a few yards he fell face-first onto some rocks, directly amongst a family of ravenous seals. Mr. Milgram brandished his corn dog and began making what witnesses claim was a poor attempt at a light-saber sound effect. As the youngster started swinging his corn-dog saber the seals became restless and started barking their protests. This is when zoo officials acted and the seals were all gunned down in a hail of bullets.

Zoo keeper Dan explains, “I think we made the right decision. The kid was a goner. He wasn’t doing well with that corn dog. No, sir. Had he a proper weapon, like a snow cone or a candy apple, this might have ended very differently. His ‘light saber’ sounded more like a wet fart. It was pathetic. I never really liked those seals anyway, entitled little shits, eating all the time. I smell like dead fish when I get home. My wife hates that shit. I was thinking about shooting them all anyway and then claiming self defense.”

Zoo officials are being criticized as, apparently, the boy was hit by two of the bullets meant for the seals. The CEO of the Cleveland Zoo, Blake Reagan, is defending the actions of his staff. “Over eighty bullets were fired and only two hit the boy,” said Reagan. “Zoo keepers aren’t like that American sniper guy. Sure we’re getting to kill more shit lately, but we’re still a little rusty. Beside, the kid’s fine. We told him to walk it off and he did …well, until he collapsed due to blood loss. He’s in stable condition now and that’s more than I can say about those little aquatic garbage disposals.”