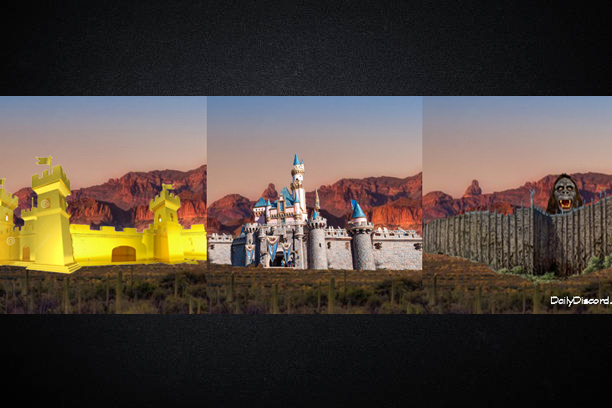 Tweet Tower—President Trump was all smiles today as he unveiled the three potential prototypes for his Great Wall of Stupid. The President told the press, “I call the one that looks like an old Bavarian-style castle, Wall Disney. It’s amazing! Amazing! But I really love the yuuge gold wall design, because, as Ivanka tells me, it will match all regions of the southwest, any season. If we choose that one, I’m using the same folks who installed my golden thrown over at Trump Tower. Great people. The third choice doesn’t look as pretty, but it’s a structure patterned after the wall on Skull Island, the one that kept out King Kong. So it’s bigly durable. I’m really in love with all of them and I look forward to the final selection and then the construction of said wall, by liberals, who will be forced to build this monstrosity. And the Mexicans will be paying for the liberals who will be building the wall …on weekends.”

Critics of the wall designs are calling them: ‘garish’, ‘ostentatious’, and even ‘loquacious’—which we are being told means ‘too talkative’ and makes little sense in the context of a wall descriptor.

Vice President Mike Pence said, “This is an exciting day for the administration and we are all looking forward to the ground-breaking ceremony to come. The only thing that could stop the onset of this historic project is, say, if we find a way to, umm, have some type of going away party for the President before then. A big party. Hint, hint, wink, wink.”

Pence later handed a badly stained bar coaster to a Daily Discord staffer that read, “Hint: It rhymes with beseechment.”