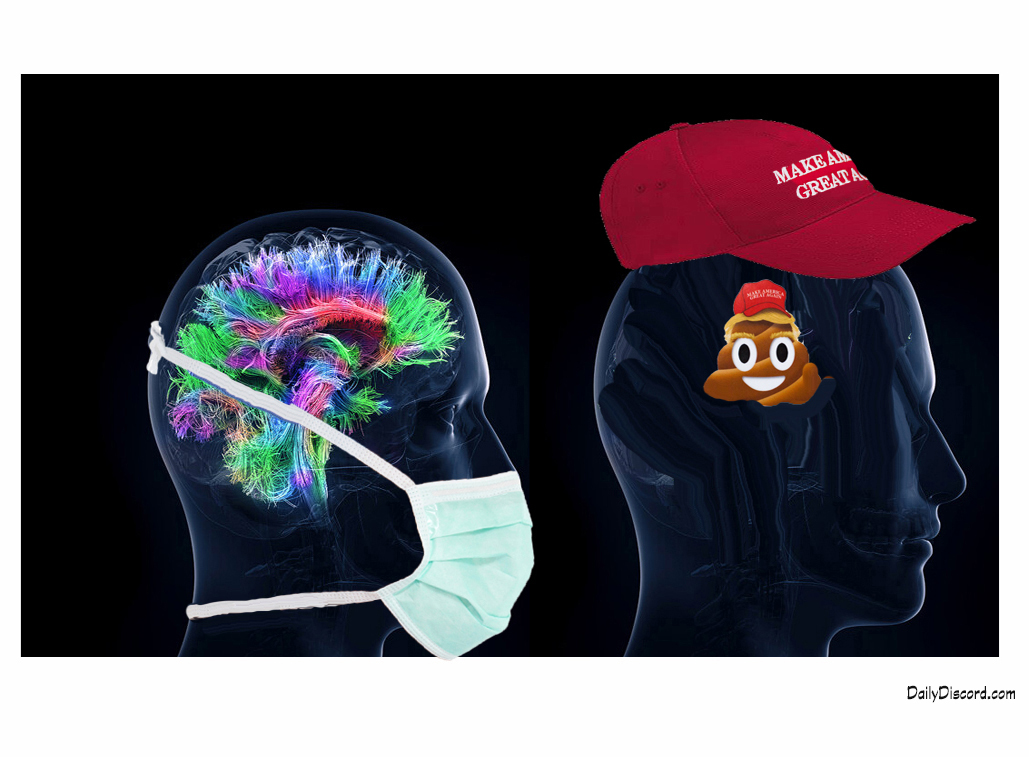 As our DOJ becomes an extension of the imperial presidency and Trump’s incompetence in the face of the current crisis drives us ever closer to ruin, what exactly drove the republican brain toward such spectacular folly? This concept has plagued me over the years, much like Bluetooth. Paranoia is a key ingredient in the conservative batshit soup. The wind beneath their cheeks? In the book American Conspiracy Theories, two political scientists out of the University of Miami wrestled with the rarity of the party in control maintaining such a high level of suspiciousness. They claim paranoid conspiracy theories are usually relegated to the disenfranchised, under-represented losers of any given election. The GOP’s ongoing reliance on Illuminatiesque subplots as the party in power is almost unprecedented. During the impeachment hearings, in true Goebbles fashion, several republican senators attacked the prosecution for attacking their own party’s fixation on irrelevant scandals. Had Hunter Biden been forced to testify, his appearance would have actually rewarded Trump’s bad behavior and made the Senate itself complicit in his crimes. Why address this reality anymore, when you can create an alternate one? So maintaining a nonsensical level of paranoia comes with some clear fringe benefits …from the same fringe poised to steal your benefits.

Even the first two years of Trump—you know, when Republicans held both houses of Congress and the presidency—they remained Jeremy Clarkson on nitro paranoid. No?  Okay, would you believe, Jerry Springer guest with roid rage angry? Okay, how about Bullwinkle’s flying rodent squirrelly? With a supermajority why didn’t the fighting Foxeteers bother to legislate? Why not reduce the deficits, fix immigration, fix our crumbling infrastructure, and find out once and for all if Obama was born in Kenya? Kidding, The GOP is a front for a criminal organization, nothing more. It’s time for everyone us living outside the Fox to realize this fact.

A republican recently asked me, “Why do young people believe their government?” For some context, this individual has more than one child in the military, one in our intelligence community, and she presumably voted for Trump …so to what part of our government is she referring? Trump? His friends? His enemies? The deep state? The shallow state? …I never asked.

Peter Beinhart cited the aforementioned U of M study, adding, “The more dispossessed you feel, and the less you identify with the people running the government, the easier it is to imagine them hatching a shadowy plot to screw you.” In the end, republicans believe what supports their own worldview, which today rests on the myopic side of fishbowly. They always have a halfbaked theory on the ready to explain all of today’s mysteries.

“In recent years we have seen angry minds at work mainly among extreme right-wingers, who have now demonstrated in the Goldwater movement how much political leverage can be got out of the animosities and passions of a small minority. …the idea of the paranoid style as a force in politics would have little contemporary relevance or historical value if it were applied only to men with profoundly disturbed minds. It is the use of paranoid modes of expression by more or less normal people that makes the phenomenon significant.” —Richard Hofstadter

I’m not the first to dig up this old Harper’s article (1964), nor am I the first to equate the modern GOP with McCarthyism. As a dude who inherited every Beatles album, I hate to see how McCarthy twisted Lennon’s legacy.

Republicans collectively suffer from a high level of paranoid delusion that is sometimes associated with personality disorders such as narcissism and sociopathy. One study suggests “grandiosity and guilt may underlie functional paranoia.” The fact they’re still considered functional and politically relevant points to just how dysfunctional our society has become.

The key symptoms of paranoia:

Again, these are symptoms of a greater illness, called modern conservatism. It’s really not that modern, actually, it’s kind of old and stale and has a last year’s X-Mas fruit cake quality to it. To survive, the right needs to constantly mine Foxal matter, here and abroad, which is why we have a ‘Ukraine scandal’ in the first place. Hey, maybe that’s why Gingrich wants to mine the moon? He hopes to find cosmic dirt on the Bidens.

Our president has but to utter some false statement and then his media minions immediately transmute it into reality, or my similar warning since the 1862 primary. How many times has Trump referenced a Foxian journalist, who simply repeated a variation of the president’s original conspiratorial crapola? Circle jerks? Ouroborish? I guess it does take an anti-personality filled village to prop up this village idiot.

Snagged from the same Beinhart article:

“[As a narcissist, Trump will] likely gravitate toward anything that will make him feel good about himself and believe that he’s respected. That makes him averse to information that’s inconsistent with that perception, and makes him deeply suspicious of the motivations of people who criticize him. It also makes him unable to meaningfully engage with a broad range of information.”

This is where Harvard gets it wrong, not so much with the statement itself, but the scope. Again, this is not a Trump-specific problem and shouldn’t be treated as such. No republican on television or in my personal life seems capable of processing this “broad range of information.” It’s not only Trump who thrived in the rich fecund fields of fact-free Foxal matter (unintended alliteration alert). One need look no further than the GOP’s conclusion after 17 witnesses testified in the House during the impeachment hearings:

Sure we all suffer from cognitive biases, but the rightwing has made it a superfood. Ohio State just released a study on how: Facts are misremembered to fit personal biases.

These same researchers used immigration numbers as their key example. During this study, they offered Mexican illegal immigration stats, which dropped about a million crossings between 2007 and 2014. For some mystical reason, the majority of participants never retained this fact.

What these researchers are failing to mention is how that this particular statistic was always going to be an uphill battle backed by incessant Fox News alternative facts. Dimplicit Bias? No matter how many times the immigration numbers are stated (I covered this too, here) republicans will believe the opposite, because of their strong, nearly impenetrable worldview. Fortress of Ineptitude?

Studies also point to an increase in cognitive distortions when personality disorders such as narcissism are present. Today we find the republican cesspool brimming with anti-personality, paranoid delusions, and, as societal stress rises faster than almost anywhere on Earth, such anxiety has a magnifying effect on all psychopathology. Think of anxiety as the fuel for the other disorders, or as one study suggests:

“Comorbid diagnoses across axes may lead to a pattern in which cognitive distortion can constrict behavior in a fashion that may actually exacerbate existing difficulties, leading to vicious circles of cognitive distortion, distress, and interpersonal impairment.”

Fear, stress, and paranoia are also the perfect psychological soup for the emergence of an authoritarian strong man. You couldn’t have the horrors of the Patriot Act without the horrors of Bin Laden. I have never understood how the so-called freedom people are the ones championing fascism, even when you study this shit it takes flummoxed to a whole new level of gobsmacked.

The problem is not that we have a president deluded enough to start a war with Canada, it’s how nearly half our country would sign up to be the skates on the ground. Operation Enduring Windchill? A study by Los D. Meloen suggests both authoritarian personality syndrome (APS) and pro-fascist tendencies are stronger in R than D. A Psychology Today article seconds the motion by linking APS to fear of out-group, prejudice, and a reluctance to engaging in novel experiences (all of which I’ve already covered, here).

“While research showed that Republican voters in the U.S. scored higher than Democrats on measures of authoritarianism before Trump emerged on the political scene, a 2016 Politico survey found that high authoritarians greatly favored then-candidate Trump, which led to a correct prediction that he would win the election, despite the polls saying otherwise.”

I’ve voiced my concerns regarding the emerging collective personality disorder, also known as the Grand Old Party, for nearly two decades, see my Conservative Rightwing American Psychosis (CRAP) theory. As the years roll on I have maintained my repulsion to all-or-none thinking, but if one side never seems to be right about anything …hold my beer.

On that note, let’s leave the last word to Mr. Hofstadter:

“The paranoid spokesman sees the fate of conspiracy in apocalyptic terms—he traffics in the birth and death of whole worlds, whole political orders, whole systems of human values. He is always manning the barricades of civilization. He constantly lives at a turning point.”

That’s what I was thinking, but then again, I can still take a little criticism …for now. But, hey, I’m watching you! Oh, and Hillary Clinton is still roaming the streets, folks, so let’s be careful out there.

For both of you who stuck around until after the credits, here’s a bonus quote:

“Since the enemy is thought of as being totally evil and totally unappeasable, he must be totally eliminated—if not from the world, at least from the theatre of operations to which the paranoid directs his attention. This demand for total triumph leads to the formulation of hopelessly unrealistic goals, and since these goals are not even remotely attainable, failure constantly heightens the paranoid’s sense of frustration.”

This brings me to Sean Hannity, who without doubling down on his stupidity each night would be exposed as the fraud that he is. His ratings are going up, but only because he’s sadly not alone.