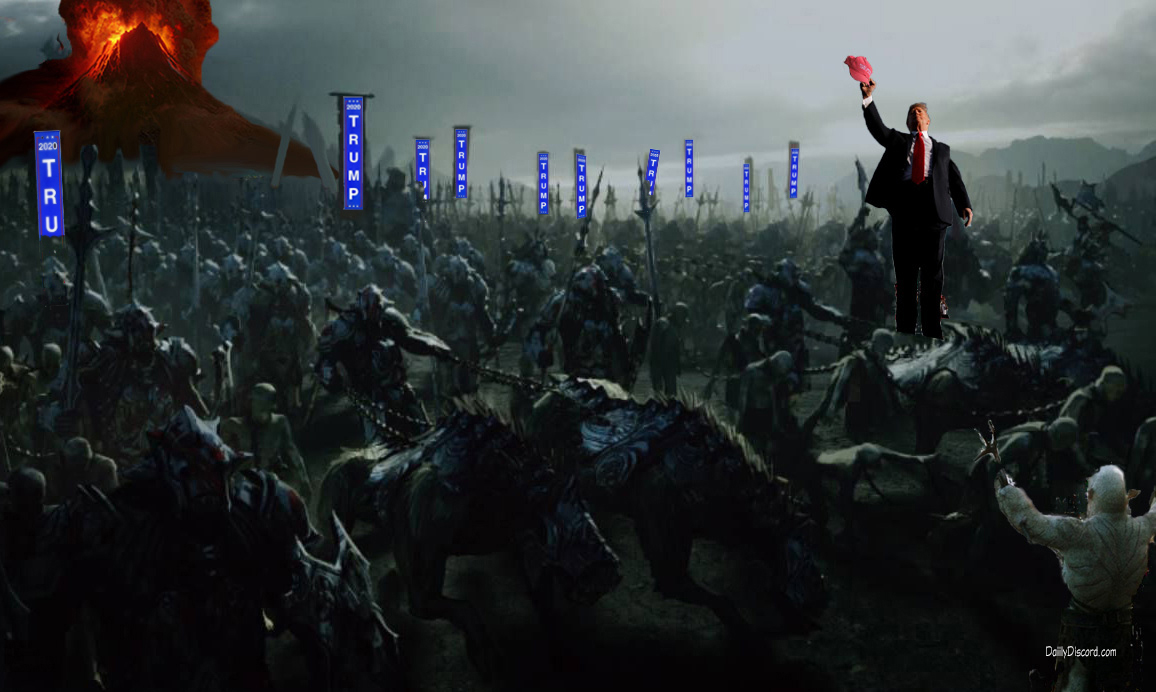 South of the Mordor—After abandoning his stint of self-hydroxychyquarantine, President Trump is back on the campaign trail! Before visiting the even-lower-48, the president rallied to the backdrop of endless hordes of Orcs, Trolls, and Wargs in the very shadow of Mt. Doom. By all accounts, this Middle-Earth rally drew the largest crowds Trump has ever assembled. Unfortunately, anyone sent to calculate actual crowd size was disemboweled and/or eaten. Trump himself offered his own assessment, “This event dwarfed the whole thing with the dwarves. It was YUGE! Forget dwarves, it was like those things bigger than dwarves …FAT DWARVES!! #MorbidlyOberon.”

Sauron himself kicked off the festivities last night via his all-seeing Jumbo-auron atop of the tower of Barad-dûr, “My fellow Mordorians, in 2020 there is only one hu-man whose platform aligns so closely with my own. And I wanted to be the first Dark Lord to throw my sorcery behind this president and his own evil minions. So stuff that up your nose, Voldemort! Get it? Get it? And I still have my best adviser working side by side with the president. Stand up and take a bow, Kellyanne!”

Kellyanne Conway appeared in a flash of greenish light amidst a burst of energy that toppled hundreds from their mounts. Sauron continued, “With Kellyanne’s ongoing efforts, DC and Mordor’s goals will remain as one. In fact, I can speak through her directly into Trump’s mind, *cough* or at least into the cavity where the hu-man brain is traditionally housed. Please exit through the gift shop and purchase some of our Make America Mordor Again merchandise! That is not a request.”

Senator Lindsey Graham (R-SC) said, “The liberals keep complaining how there’s not enough diversity in the republican tent, but this is the picture of adversity—I mean, diversity. Sauron’s armies contain Orcs, Trolls, Variags of Khand, the Rhun, Far Harad, Wargs, Nazgûl, and even some ANTIFA we lured to the darker side.”

In related news, Tweet Tower Unleashes The Nazgûl To Hunt The Last Inspector Generals Of Men.

And, Last Call Of Cthulhu’s Closes Its Portal Forever.