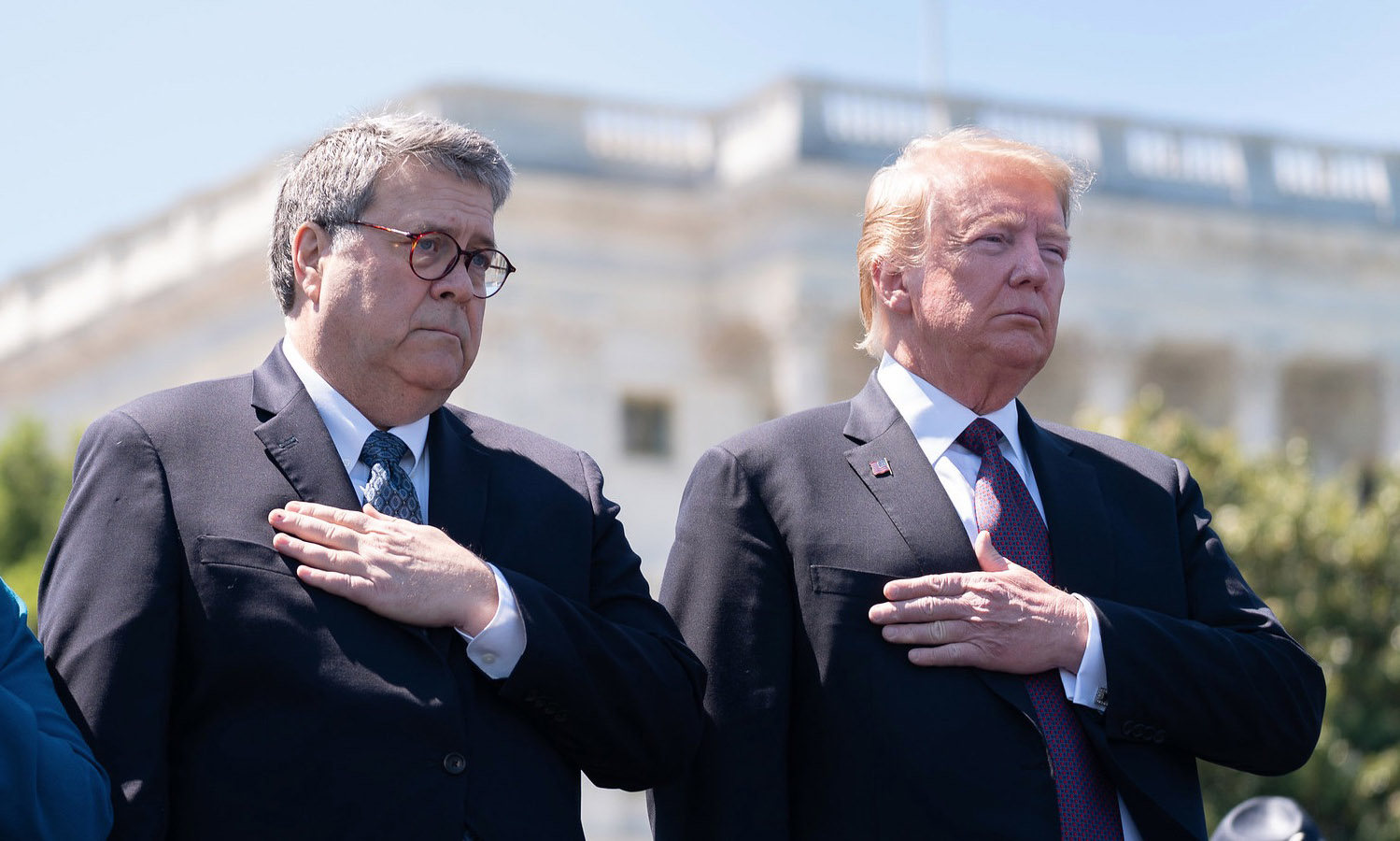 So hold on Fox & Friends, I’m supposed to be sad about the supposed railroading of former National Security Adviser Michael Flynn? You know, the semi-treasonous, perjuristic, Logan’s Run-act-esque, compromised-as-hell Trumpster, who’s probably still covering for the worst president in history? Fine, the worst president in history was James Buchanan. And, yes, I predicted that Old Buck would pay a steep political price for ignoring the growing polarization in 1858, right here on The Discord—back in those days you had to etch your words onto the laptop screen with a chisel. And schools didn’t close for a lousy pandemic, hell, for the black plague I had to bring in a rat for show & tell. Need I remind our republican friends, they are the ones who consistently appoint the strictest judges, pass our strictest laws, and are always the first to forfeit our liberties for security (sung to the tune of Lock Her Up). Post 9/11, you folks handed every tool in the shed to our intelligence community and now you complain about it when it uncovers both foreign interference and domestic liars?

Fun Fact: When William Barr is done revamping the DOJ, he will only sharpen and hone said tools for the New Republican, and he will then start carving up any perceived political threats like an X-mas goose (War on Christmas joke sold separately).

For those innocent-until-proven-guilty folks …uh, Flynn was found guilty, in fact, he pleaded down to lying to the Feds for “cooperating.” All sales are final, unless you’re a Trump goon. The US would be better served following my simple guideline: innocent until proven republican.

We cannot allow republicans to whiteywash history. And did you happen to catch Michael Flynn’s behavior on the campaign trail? And the Trump Administration is overlooking their own claims that they fired Flynn for lying to our VP. Oh right, in their defense he probably was waaaay under quota in that area. Still, were they lying about his lying, or is my blogvesary lying about their lying about his lying? Am I lying, right now, about their lying lying lying? Well, I for one won’t take this lying down.

[Retraction: lying down is all I do now, between walks to the fridge.]

If you truly cared about our rights, you’d be trying to keep Barr’s powers in check. Kidding, it’s too late. There is a Federal judge trying to block Flynn’s release, but will this have any impact on this unprecedented power grab? My guess is no. I’m no legal scholar, but it does seem absurd for a Federal judge to try to overrule our DOJ, but it also seems equally disturbing to have our AG acting as a Trumpian thug #Law&Disorder.

USA Today believes the DOJ should release their newly hyped evidence on the rationale for overturning a court ruling. Don’t worry, they’ll come up with something, but will it be relevant or truthful? My guess is no and no. On the book of faces, my blogversary purports to have a sneak peek at Barr’s evidence which hinges on FBI Agent Peter Strozk’s withholding evidence. Barr apparently unearthed something every other inquiry and investigation failed to. Hmmm.

Here’s what’s actually happening, William Barr is dismantling the Russia probe, sentence by sentence. Do we have a shock face emoji? For review, IG Horowitz found no evidence of political bias during the Russia probe but he did find it was conducted about as incompetently as anything else in this late-stage democracy, aka, errors were widespread across the department. Despite this pervasive shoddiness both Horowitz, and eventually the newly appointed FBI Directo Christoper Wray, determined the investigation was started on legal grounds.

Or some vintage Zano:

“Let’s be clear what’s happening here: while a president is being impeached for egregious acts, the right-wing media remains laser focused on procedural problems involving the origins of an investigation that netted 34 indictments.”

Or, this old adage:

“If at first you don’t impeach try, try the investigators.”

If Barr can find charge one or more of the investigators, then they can cast an even wider net of Foxian ‘what ifs’ to ensnare Biden, which was always the plan.

Step Two: garnish with real semi-related misconduct by someone, anyone.

Step Three: Extrapolate to the Hannity side of hyperbole.

But unlike Benghazi, this one carries the weight of the law behind it, and it’s a very easy jump from routine/standard intelligence community procedure misstep to criminality and from there the fictional narrative does the rest. Make no mistake, Barr will find a mistake and bridge that gap. Mind the gap.

Trust me on this, the normal operating procedures of our spooks will prove scary enough, as republicans have worked hard over the years to make it so, but now any mistake will be weaponized and tied to Trump’s chief opponent. These dubious connections will be proven false, of course, sometime during Trump’s third term.

Why does my friend continue to aid and abet known criminals? It’s beyond me …like Windows Vista. Pokey never appreciates my view from 30,000 feet; he much prefers to climb down into the weeds and F everything up from ground level. Roundup anyone? This article was inspired by my friend’s FB post that led to a lengthy debate. Here’s a funny excerpt: 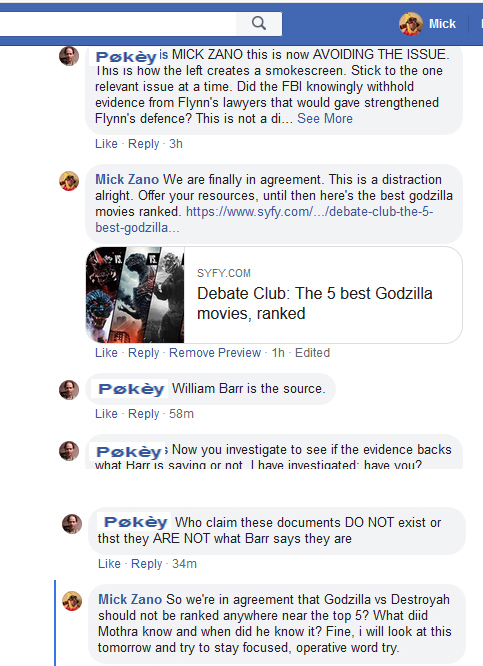 My friend resides forever in that eternal moment of zenwrongness, wherein their case is juuuust about to crack, any moment. We’ve been battling for decades, but it’s always some version of: all will be revealed ….tomorrow. Republicans leave an endless trail of irrelevant breadcrumbs …breadcrumbs that lead right to a Barr trap. This time it’s leaked info from Durham’s upcoming report—leaked apparently only to my friend Pokey, who claims FBI Agent Peter Strzok held onto evidence that proves Flynn’s innocence. Uh huh.

My friend also believes the implications will lead right to Biden and Obama’s doorstep, and even said, “things are going to get very interesting.” I checked Fox and everywhere else for this evidence, and although Fox had three related articles none back my friend’s claim. They were focused on unmasking; their old standby. We got nothing, so let’s run with unmasking. That was always Stan Lee’s go-to back in his old Marvel days.

Pokey’s view from the weeds: Strzok and Page, led by Hillary and Barack illegally spied on the Trump administration to bring down a duly elected president.

Zano’s view from 30,000 feet: Any of them could have just leaked the investigation to the press at an inopportune time on the lead up to the election …none did.

Pokey’s view from the weeds: One of five high-level Obama officials unmasked Flynn in a nefarious plot to eventually frame him.

Zano’s view from 30,000 feet: Uh, he was never masked in the first place. They always knew who made these calls to Sergey Kislyak. The Patriot Act allows for all foreign correspondence to be monitored. In short, he was never hidden enough.

Today some are calling for Mueller to speak out and defend his work. Give me a break. He said, “My work speaks for itself.” Yeah, everything was really cleared up, Bob. Mission Accomplished. But does that top this one? 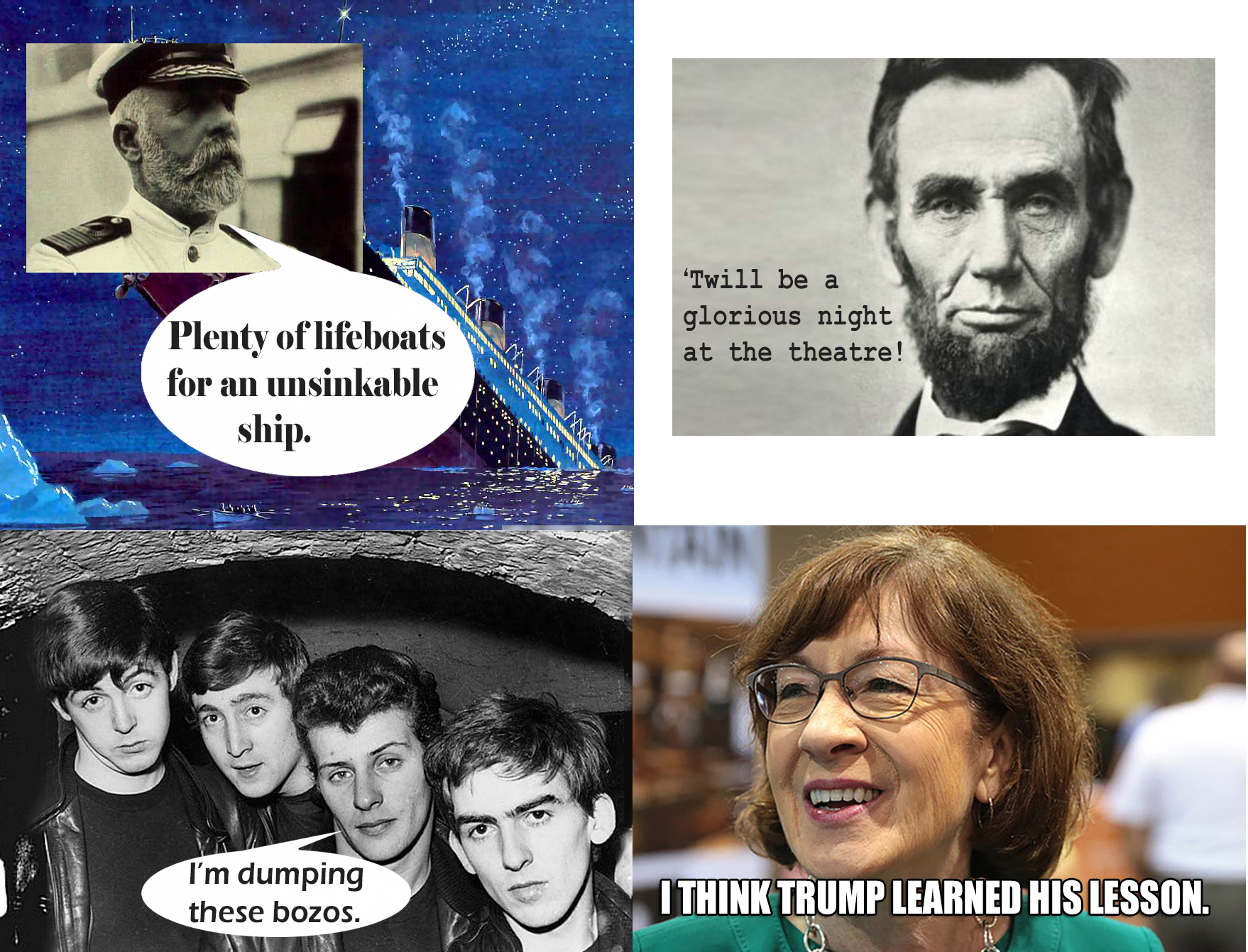 Hmmm. Too close to call.

Start with a lie and then double down. It’s easy peasy, folks …losing one’s republic often is. Here’s my last view from 30,00 feet: here’s what’s actually happening while my friend Strzok’s out, Federal Government Buys Riot Gear, Increases Security Funding, Citing Coronavirus Pandemic, and as I move to post Trump just fired another IG, who just happens to be investigating Mike Pompeo.

Yikes. But good luck razing the FBI, Pokey, I hear there’s an agent on the second floor refusing to collate properly. You better get on that.