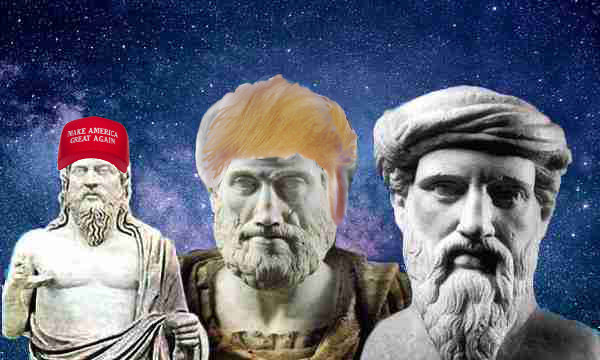 The Discord had the chance to interview several ancient philosophers regarding the Founder’s vision of impeachment proceedings. These discussions occurred during a Ouija board session that ironically included several session IPAs from Founders. Socrates admitted from the onset that he is a SINO, or a Sophist In Name Only, but Plato immediately argued he was never considered a sophist in the first place. Plato reasoned Socrates could potentially become one through the world of the senses, but then it would be more accurate to call this an ontological becoming. Neither would discuss Trump’s situation and told us to “piss off,” because they were just starting to watch season one of Hemlock Grove on Netflix. The sophist Zeno of Elea did comment on the impeachment by reminding everyone how an infinite number of halfway points exist between the House and the Senate, and since no one can traverse an infinite number of anything, he argued the Articles of Impeachment could never truly reach Mitch McConnell’s desk. He recommended both sides visit his pub at Penn State instead, but then argued against the journey by citing the same ‘motion is illusion’ premise.

We were also able to reach Heraclitus, who touted “Panta rhei,” or that everything in the Universe flows. He then reasoned how the Articles of Impeachment must flow from the House to the Senate in a state of ever-changing flux. He reminded Mitch McConnell that he can never step into the same impeachment twice, and the longer he waits the more things may change for the worse. Heraclitus then argued that the only way McConnell could stop the natural impulse of the universe was to “go flux himself.”

Protagoras argued both for and against the conservative position, yet somehow managed to lose on both counts. And finally Aristophanes turned the Senate Trial into a play, wherein the members of congress were all dressed up as badgers and constantly badgered each other for several acts until a giant enters the senate chambers and roasts them all for dinner on a large spit.

Aristophanes was later charged by the president with treason and sentenced to attend the Golden Globe awards sober.