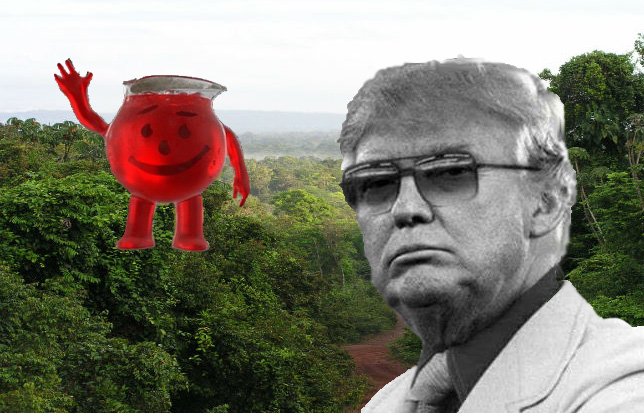 Donaldtown, GY—Mark your calendars, folks, because next November former president Donald J. Trump will be taking his whole basket of deplorables on a magical mystery rally for even more bigly winning! Cult-45 is cordially inviting all of his key peeps to join him at a newly established city of gold, deep in the jungles of South America. The president is believed to have built something he calls a ‘metopia,’ because, as he told his new legal defense team, “There’s no you in you-topia.” He also added, “We have all the merch! MAGA hats, MAGA shirts, MAGA buttons, and all at MAGA discounts!!” When asked to clarify, he said, “Oh, yeah we changed my slogan to Make America Guyana Again. I’ve been trying to get the locals to start hauling blocks to build my Trumple, but so far they’re refusing to drink the—well, you know.”

During an exclusive interview with The Discord, Trump said, “This place is going to make Mar-a-Lago look like a frickin’ Denny’s. Let them eat chocolate cake! I came, I saw, I squandered. And what’s that other one? Government of the people, by the people, uh, yeah, I’ll buy some people. But, remember, it’s BYOK: Bring Your Own Kool-Aid, because it’s way too expensive to ship anything to this shithole country. It will be a truly spiritual experience for those willing to open up their hearts and their pocketbooks. Bring your daughters! No really, you have to because most of my older female supporters look like a trailer park mated with a Jack in the Box. Oh, and pack light. Trust me on this one.”