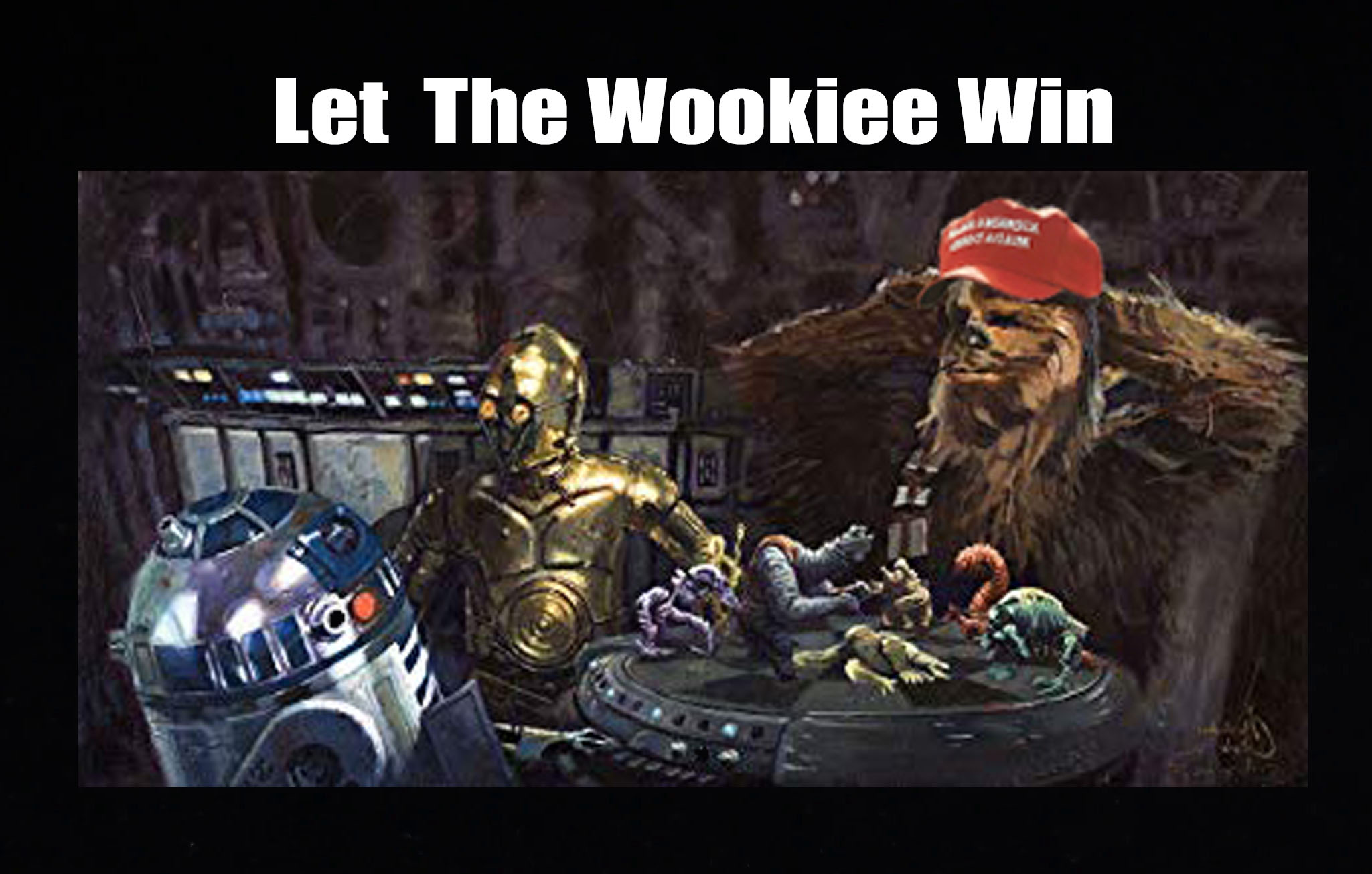 There’s only one way to avoid the pending Iran debacle and the solution reminds me of that time on the Millennium Falcon when Han Solo encouraged C3P0 to: “Let the Wookiee win.” If we’re going to spare some blood and treasure by avoiding another senseless war, to say nothing of getting our arms pulled out of their sockets, we need to heed Han’s advice on this one. What if we re-sign the same Iran Deal with the addition of some Trump accolades, a bucket of exclamation points, several hashtags, and then drop the Flesch-Kincaid reading level to accommodate the typical Fox viewer? I guarantee you our president hasn’t read even one sentence of the original agreement, so he won’t notice. If someone within the Trump administration would back my scheme then We.Got.This.Shit. Disaster averted. If everyone both here and abroad would agree to be in on the joke we could resurrect the Iran Deal, call it the Trump Deal, and effectively let the Wookiee win.

Think about it, we just need to buy some time until all these pending investigations finally indict this ass-clown of a—

When you create problems and then magically fix them in the economic world, no one gets hurt …well, besides our farmers, and certain business owners, and people impacted economically who can no longer afford healthcare, and poor people who’s insulin—

With then ticking environmental time-bomb all we have to do is just survive, as a species, until 2020 when America regains what’s left of its senses and elects anyone but a Republican—

[See why I want to gouge my eyes out with dirty, plastic, sea-mammal-choking spork?]

Trump’s recent tariff shenanigans, horrible though they may be, are generally a much lesser evil than the bluster, bluff and other nonsense associated with the consequences of an incoherent foreign policy. I’ll bet Europe, UK, China, Russia even Iran would all prefer my sinister, yet brilliant plan to calm tensions. The hurdle? We just need some buy-in from at least one of Trump’s senior sycophants. The administration is the special group in this scenario. So if all the adults, military generals, and sentient creatures are long gone, who could still play ball? Hmmm.

So far you’ve been a complete hawkish train-wreck of a Secretary of State and yet somehow you’re the best chance we have to pull off my coveted and critically-acclaimed Zano Maneuver—a maneuver designed to save countless lives while avoiding another ‘Murican Accelerated Gratuitously Avoidable Military Embarrassment (‘MAGA-ME). All we have to do is resell the Iran Deal to Herr Ass-clown. Just rearrange some verbiage, maybe take out some of the three syllable words, or, hell, just remove an Oxford comma or two and presto! Call it the Trump Iran Plus Plan (TIPP) and then you can tell the ayatollah: this time we promise, just the TIPP.

If you recall, everyone was really jazzed about the original Iran Deal, so we don’t have to reinvent the spiel here, we just need a furtivesque redo. During negotiations we could use a series of winks, nods, and note-passing during Trump’s expected, nearly thirty minutes of grueling negotiations. Here are the secret codes we can use during this epic global chess match:

Point to your own head while swirling the same finger and nudge some body part, indicating Trump.

Extend one or both of your middle fingers, when applicable (best initiated when Trump is gazing at his reflection or tweeting).

Should negotiations take a turn for the worse (for mankind), announce the arrival of lukewarm fast food in an adjacent room. Then, upon Trump’s return, he won’t remember the conversation prior to said break.

If you are going to employ the above strategy, please have lukewarm fast food on hand. Remember, Donald Trump has access to the nuclear football.

Post negotiations, the president can then tweet a bunch of other stuff to add to his perceived victory, like: the Aytollah is starting to send me Kim Jong Un-style love letters, the Iranian guard is going to spell out my name during a military drill, or Iran promises to name a base after me just as soon as I’m out of office. Fox News can run with it and their idiot base will fall for it (see: every news cycle in the 21st century …Fox). Disaster averted. See? We could actually use Rupert Murdoch’s powers for good. Who knew? Sure this is a violation of the Logan act, but we’re talking Star Wars, not Logan’s Run. Besides, Kerry will do it, legal or not …for some Kerry snacks.

So who are the key players, Zano, and what does this New Same Deal get them?

Iran: The Ayatollah refuses to appear weak, but really doesn’t want a war with the U.S. They want to resume the Iran Deal, which lifts some sanctions in exchange for the continued cessation of any progress toward nukes. They don’t want x more years of renegotiating the same thing (this time with assholes), so we will have to sell this as an ‘under an hour’ kind of thing. They can hold it late morning or early afternoon, so they don’t even have to serve food. They may even be willing to sweeten the deal. Maybe as an extra “concession” Iran would agree to sell some of Ivanka’s products in their malls. Operation Enduring Fashion?

Trump: He wants to be perceived as a great negotiator and, as a narcissist, he doesn’t really care about anything else. Winning is all that matters, details be damned. To his credit, he doesn’t want a war, he thinks they’re stupid. The problem? So is he. But a nearly exact replica of the Iran Deal complete with a new Trump smell would really wow the Trump base.

Fox and Friends: With any change to the document, even the aforementioned Oxford comma maneuver, and the right will run with it. Get Iran to promise to stop sending caravans through Mexico, or have them promise to end their proxy war on Christmas, maybe they will even admit to colluding with Hillary to attack Benghazi, whatever. If you haven’t figured this out yet, it doesn’t have to make sense.

We distort: You Decide.

The Trump Base: They will follow the lead of the president and his state sponsored propaganda channel to the letter. White Supremacy hand signals sold separately. They are like lemmings, well, after you hit a lemming in the head with a rock.

Liberals: Enough are quite capable of controlling their egos long enough to let this president have this victory lap for the purpose of avoiding the next— (see: ‘MAGA-ME joke).

Everyone else involved in the Iran Deal (EU, UK, Russia, China and sometimes Russia): They don’t want to sit down for the next several years and rehash the same shit that was worked out under a competent administration. They will go along with the ruse. No one likes the prospect of a nuclear Iran, a spike in oil prices, or the threat of another U.S.-led botched invasion that will result in more global economic chaos, more fleeing migrants, and an even less stable Middle East. Putin is the only wildcard in this scenario, but even he is demanding our compromised president stand down. If Moscow does become the issue, just give Putin some dirt on Biden that he can then give to Trump.

Hint of the Day: No liberal will be left standing after the primaries, so the joke is on… everyone.

Zano: He loves the idea, namely, because it’s his idea and he has a really large, untamable ego as well. And he came up with this while day-drinking. He loves day-drinking. Yay, day-drinking!

What if we can’t stop this, Zano?

If we are heading for war, remember, there’s always day-drinking. Fine …for this round there will be no Coalition of the Willing, unless you’re talking about Trump’s senior staffers and some Russian hookers. For the Iraq Invasion it only became clear, years later, how the U.S. lied the international community into war. For any conflict with Iran, however, it will be universally agreed upon from the onset that this is our baby. If things escalate, which seems likely, the global community will understand this was created through ignorance, bluster and tweets. I warned my blogvesary, before his vote, that any deaths in Iran get applied directly to his karma, here. Sorry, but you don’t get to keep fucking up the world with impunity. A vote for Trump was a vote for death and destruction. Own it.

To avoid Trump’s Id-driven Iran debacle (Id-ID) we must somehow placate all of the egos involved, which will be no easy trick. On a good note, my predictions will prove to be accurate. After an unnecessary war and a constitutional crisis during Trump’s first term, we just have to wait patiently to see whether or not the economic collapse happens at the end of Trump’s first term or well into his second. Such fun! It’s like that Heinz commercial. An-tic-I-pa-tion… it’s making me Great. Again. For those not familiar with that commercial, try to ketchup.