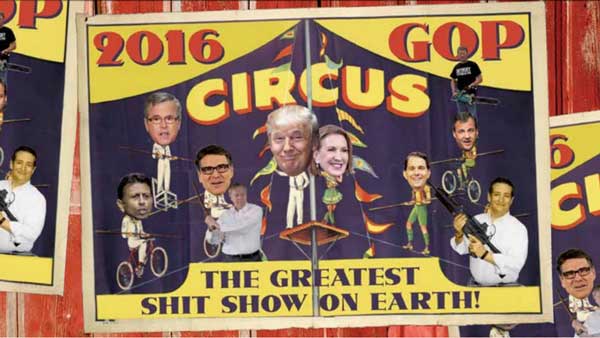 Oz—After much ado about show biz, the oldest and most famous circus of all time will end all performances in May of 2017. Chairman and CEO Kenneth Feld explains, “I made the difficult business decision that Ringling Bros. and Barnum & Bailey Circus cannot continue under a Trump Administration. We have elephants, they are elephants. We have clowns, they are clowns. We can’t balance our budget anymore, and they never could, yada yada. Granted Republicans are a little more akin to a theater of the bizarre, but this industry has become like mass-producing those hobo-clown collectibles, sad and redundant.”

After 146 years of continuous operations, the circus of circuses is throwing in the dagger. When asked if more than just a Trump presidency factored into this decision, Feld replied, “Well, it’s also those animal rights activists, fuckers, and then there was my decision to purchase an orca from Sea World. Holy shit was that a bad idea! Not only was she a bitch to transport and feed, but the damn thing ate lizard boy. Look, we wouldn’t be stopping if we didn’t think Trump will make the best ringmaster in the free world, the best. It’s not as steep of a transition as one might think. Lion tamers can become lying tamers, journalists can all be launched as human cannonballs to fight ISIS or fight hipsters, etc.”

When asked if prejudice and misogyny would impact the White House version of the circus, Feld said, “Yeah, I admit certain jobs, like the bearded lady, might be tougher under a Trump Administration, but there are also a lot of positives. Think of all the elephant poo scoopers that will be needed for the next four years. And who better than stilt walkers to finish the top of Trump’s wall? Not to mention, the President-elect is already eyeing some of the freed-up talent for some key cabinet positions. Think about Putin having to contend with a dagger-throwing contortionist during negotiations. Or how about sending a snake charmer to handle Kim Jong Un? Our next president will be juggling all kinds of really stupid shit and that’s our specialty. Oh, and I am being told he is already planning to cross-train all of the women to be sword swallowers, the sicko.”