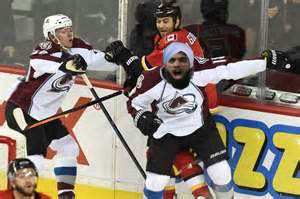 In a deal many republicans are calling “reckless” and “shortsighted”, The Department of Defense has traded the last of the Guantanamo detainees to the Colorado Avalanche. This move follows other controversial deals that have scattered the prisoners into several teams across the National Hockey League. One detainee is already in critical condition after being ‘Zamboni-boarded’ between periods by his own teammates.

Senator John Q. Republican said, “It’s yet another sign of weakness, not strength. Did Obama even consider sending these prisoners down under to play Australian Rules Football? Wouldn’t that be a more fitting punishment? Why does Obama want to close Gitmo? Why even care about fulfilling a campaign promise at this point? It’s like starting to become a fan of Tyreese from The Walking Dead after he’s eaten by zombies.”

Rush Limbaugh also criticized the move, “This is a worse deal than that Bergdahl thing. He was just a deserter, but these MFs are hardened terrorists, who probably can’t skate worth a damn. I have season tickets to the Rangers, but if they let Hammond Mao play, I’m scalping my tickets. If these truly are Gitmo’s worst of the worst, why the hell weren’t they all traded to Toronto?”

President Obama addressed concerns today. “The obstacles to closing Guantanamo Bay were great, so who better than hockey players to rehabilitate radicals? When normal legislative channels proved ineffective, I was forced to call NHL Commissioner Gary Bettman. When he accused me of being a Jew-hating Kenyan I signed an executive order to have the last detainees dispersed into his league. The NHL has its own disciplinary system, whereby detainees will either adapt or suffer the consequences. Oh, and they’re not playing with either helmets or cups. The cup part was actually Hillary’s idea.”