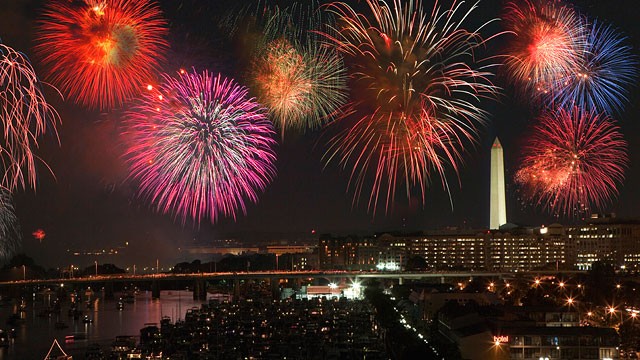 Washington, DC—Washington was assailed by a barrage of patriotic and colorful missiles. Didn’t you read the headline? The President is referring to this attack as Operation: Flag and Awe as many onlookers waved flags and said “awe” during the hour long siege of our Nation’s Capital.

The President, who to onlookers appeared drunk, rambled on about NASA and England’s upcoming UFO disclosures and then started plagiarizing parts of the presidential speech from the Sci Fi movie classic, Independence Day. It marked the first time in U.S. history the Secret Services contemplated taking out the President in the interests of national security.

President Obama said, “Hello Cleveland! (Inaudible.) My fellow fellows, perhaps it’s fate that today is the Fourth of July, and you will once again be fighting for our freedom… Not from tyranny, oppression, or persecution… but from annihilation (inaudible, followed possibly by a belch).

The President continued for another 45 minute rant that included excerpts from Churchill’s speech, Ramsay’s Hell Kitchen, and various garbled quotes from Star Wars IV: A New Hope. The Commander in Chief then began listing random items from the Del Taco value menu before breaking into what many are calling the worst rendition of The Beatles Octopuses Garden since Biden’s Rose Garden Sangria Saturday.