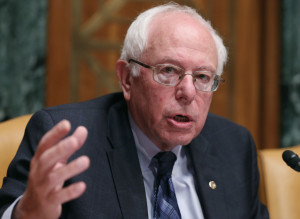 Madison, WI—The self-proclaimed socialist, Bernie Sanders (I-Vt), is rocking the campaign trail. Over the course of the last three months he has raised an estimated 15-million dollars. The current Vermont Senator made a bold statement in Wisconsin today, “I am not having any of it…well, more accurately, I’m only going to have some of it.” In the true spirit of socialism, Sanders plans to divvy the funds equally between all the other Democratic presidential hopefuls.

Sanders told reporters, “Socialism works and Hillary doesn’t. Can you say, Benghazi? No really, the H is silent. It’s weird. Anyway, I’m just glad I’m running on the Democratic ticket. Hell, if I had to split the money on the republican side I’d have to raise enough to fund the Defense Department just to get enough for a Starbucks.

Speaking of which, Starbuck baristas split their tips equally at the end of each shift, so I may yet divert some campaign donations to purchase a coffee there. I can do that right? I think the Supremes made that legal in Citizens Caffeinated. I’ll have to check on that. Hey, for going up against the Clinton Machine I at least deserve an F-ing coffee!”

If elected, Sanders also plans to split his Presidential salary with everyone on welfare, which Paul Krugman estimates to be approximately .2 cents per person. “I know you can’t do a lot today with .2 cents today, but…oh, I just can’t do it. I had a prepared joke about throwing in my .2 cents, but I just can’t. Moving forward, Zano is not going to write any more jokes for my campaign. He’s kind of a douche. No coffee for you!”