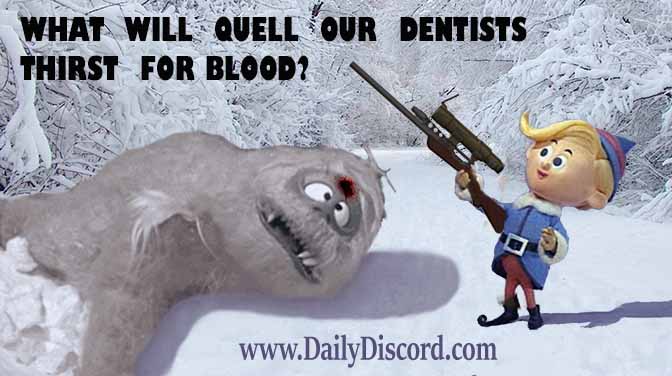 Santa’s Workshop, NP—A Bumble, best known for his tree-trimming prowess in the children’s classic Rudolph the Rednosed Reindeer, is dead at 93. The loveable white monster was a favorite among visitors to the frozen north. Kris Kringle is reportedly “furious” and plans to banish the elf to the land of Misfit Toys. When a reporter pointed out how the elf is not actually a toy, Claus said, “He’ll look like Pinocchio after a Saw when I’m done with the little bastard. I knew when he stopped making toys to pursue a career in dentistry, something was amiss. Who does that? Especially with malpractice insurance these days?”

When a reporter warned Santa of the potential consequences for making terroristic threats, the jolly old elf replied, “I’d put coal in your stocking for a decade, but the Obama Administration is threatening to sanction me for that kind of carbon footprint. Look, before the Bumble placed the star on the tree each year, I had at least a half a dozen tree trimming related injuries. Once, a gingerbread man fell from the top of the tree right in front of a toy train. It was a crumby way to go.”

Republicans are citing the incident as further proof of the War on Christmas and the elf dentist who shot the Bumble is refusing to answer questions. The NSA is reporting the elf was placed on the national denterrorist watch list for a disorderly conduct involving Jack Frost in 2006, as well as an incident involving the Winter Warlock and an underaged dwarf.

Search Truth Quest Captain, Mick Zano, said he is “thrilled” about recovering the body of an important cryptid but “saddened” about the circumstance surrounding the creature’s death.