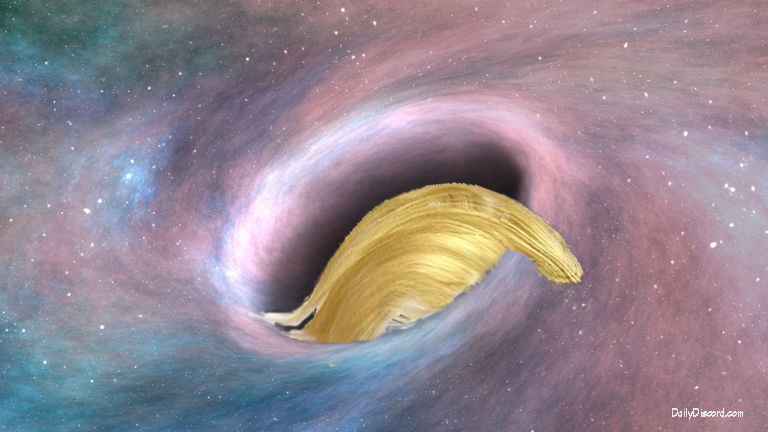 The Universe—The recent picture of a black hole, the first of its kind, has many scratching their heads today. Is there a connection between time/space and the Trump/race continuum? Is this truly an image of a black hole, or a White Nationalist Dwarf? Whereas some theorize this is proof the universe is deplorable, others suggest it’s evidence the universe is hollow & graphic in nature. Science has been grappling with these two related cosmic questions for decades: what is the true nature of both the universe and the president’s hair-dome? At least one scientist believes the two areas of inquiry can be connected in one Grand Polarized Theory, or what he is privately calling the Bigly Bang Theory.

Dr. Sterling Hogbein, of the Hogbein Institute and Coin Op Laundry, said, “This photo is telling …it’s telling me to move to an adjacent parallel universe, ASAP! This one image changes everything! Can we now safely add the word silly to String Theory? I think so. This also contradicts Stephen Hawking’s latest research on Black Holes Matter. The nations of the world need to unite to build the first super colluder to counter this growing cosmic threat. I’m just going to need like a trillion, and some gas money.”

President Trump is denying any collusion with the universe and believes the image: “Proves nothing!” and is “FAKE NEWS!! #NoColluder!”

In another rare event, The Discord is in agreement with the president’s assessment, which may also be a precursor to a pending galactic disaster that could incinerate the Earth outright: “But it will be the BEST NOVA! A really SUPER NOVA!!”, tweeted Trump.