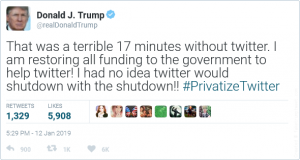 Tweet Tower—President Trump ended the government shutdown 17-minutes after Twitter announced it would be closing the president’s account. The company also informed the president that it relies heavily on indirect government funding to remain a leading social media platform #GovFundMe. Upon hearing the news, several White House staffers claim the president frantically tried to log onto his Facebook account. This ended minutes later with a Presidential Zuckerberg-Related Tirade (PZRT) that could be heard clear to the Washington Monument. The president then cursed all of the Facebook founder’s children and his childrens’ childrens’ children, before opting to bailout twitter and end the shutdown.

The president told the press today, “Twitter is an important presidential tool, and so am I. We’re a good team. There’s no “I” in “twitter.” Without this important web-thingie, how can I start or end wars, or how do I fire, promote, or piss off my cabinet members from the shitter? It was a long, lonely terrible time!! This was a true government shutdown! Not that closing-some-parks crap. I thought about signing an executive order to override twitter’s decision to close my account, but then I said to myself, this has gone on long enough. Twitter is pardoned for now and the parks can open and stuff.”

The president claims the wall is still going to happen and that he has several other plans he’s currently coordinating with his National Insecurity Adviser that many staffers believe will be even more drastic and spectacularly ill-conceived.