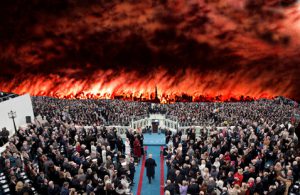 Most of us get up in the morning for work and drive over the structurally unsound bridge and then pass the accident at that same place …you know, the dangerous intersection the city keeps ignoring. But it’s all good. The cop writes the tickets while the mechanic, the tow truck, and the hospital get their cut and, hey, now they captured it all on camera to maximize litigation. Then you make it to work and report to the Board-selected sociopath—who, surprise surprise, the governing board identified as the only personality disorder anywhere near the top of the food chain—a person whose sole, yet soulless, job is to figure out how to do more with less human resources. And you are a salaried employee, possibly in a right to work state, which translates as: you’re on call 24/7 and please work 50-80 hours a week or we’ll find someone else who will. Oh, and we can fire you without cause, just ’cause. You wander to the window where the facility guys have resumed emptying those skull & crossbone labeled barrels into in the culvert across from the park. Sure, the drinking water’s getting a little Flintier and the food is getting a little more salmonelliear, but we’re saving money, right?

Meanwhile, they keep announcing how the agency is making more money, or less money, but either way your deductible is going up and your coverage is shittier and pricier each checkup. This raises your blood pressure, which is now a pre-existing condition, so the day they walk you out you’re really screwed. You get home and call the contractor who only breaks your appliance more, for a hefty fee, and then you get on the phone to try to figure out how to get affordable health care that crosses state lines, because you’re trying to take this show on the road. Hint: You can’t get affordable health care in the U.S., and only people cross state lines, not coverage. Freedumb? Speaking of your phone, you have to call Verizon because your number was sold on a list and you’ve been inundated with telemarketers ever since. You also have to call your bank because someone either got a hold of your information, or you suspect someone has. My bank is Wells Fargo so YES.

You consider signing up for the ACA, but Texas just dealt it another blow and the Supremes will likely finish Obamacare off before you can use it. Soon there will be less coverage options for any solo entrepreneur, the unemployed or the impoverished, thereby increasing your incentive to return to another cubicle and report to the next sociopath. Oh, and as for that cubicle, if it doesn’t come with lead paint, carcinogenic flame retardant carpet and/or exposed asbestos, the Trump Administration will downgrade your designated cubicle for no extra charge. Round Up inundated perimeter sold separately.

Then you turn on the news to see a barely sentient, electoral-college-selected sociopath degrade, demean and dodge his way toward the next economic abyss. The world is crowded, resources are dwindling, and the shining beacon on the hill turned out to be a Chevron station. America is broken, kids, morally, economically and otherwise. And let’s be clear, whenever we as a country are shortsighted enough to elect a Republican president, like Pud’s grandfather, we’re all On Borrowed Time. I’m not saying liberalism is the answer, but I remain convinced our Republican friends never are. Don’t get me wrong, despite the ongoing misappropriation of reason, I’m enjoying life. But maybe in some ways that’s the problem. Fueled by an illogical yet supercharged normalcy bias we have all collectively turned the other cheek. We are no longer just flirting with disaster, we’ve taken disaster to some sleazy rent-by-the-hour motel and loaded the coin operated massager.