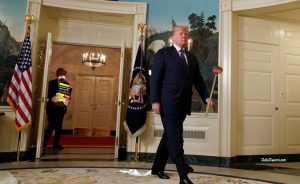 I’m going to cut my friend Pokey some slack. He’s just being used by our rightwing friends and lucky for him the inability to process information is not a crime. Devin Nunes and my friend Sean, on the other Hannity, are actively aiding and abetting a known felon. I’ve touched on this before, because I like to discuss what’s going to happen and avoid my friend’s approach, namely the misinterpretation of everything that already has. Many of us remain 90% sure that a variety of felonies are heading Trumpward. But others close to the president have known about this wide array of wrongdoing for a long time. Likely charges on the low end of the spectrum = obstruction of justice and a wave of white collar crimes. High end of the spectrum = full blown conspiracy + that other shit. The former should—and the operative word here is should—trigger impeachment proceedings. The latter should—and the operative word is should—trigger the full annulment of this administration. Team ass-clown is likely compromised to the Russians and the Saudis. Who knew? Uh, well, most of us. If it walks like a Trump and tweets like a Trump #ItsATrump. My above equation shows the results of such misdeeds in a functional democracy, which we no longer have. Yes, we ran past the point of no return on our environment and our democracy while half the country was too busy investigating the Clintons. Thanks? Today I want to talk about those enablers among us. Not my friend Pokey, a man blinded by the right, but those who are clearly aware of the wrongdoing and yet are protecting the enemy’s of democracy. Post Mueller’s findings, here’s who needs to fry for protecting Trump:

Exhibit A: Devin Nunes (R-CA). As the current chair of the United States House Permanent Select Committee on Intelligence, Nunes is the man supposedly leading the investigation into Russian interference and collusion. Thus far he has wholly abdicated his duties. He interviewed people with no follow up questions, no subpoenas, just implemented an honor system among thieves. Then he ran all the juicy info back and forth to those accused in the White House. This guy should fall on the Manafort/Cohen side of the sentencing equation as opposed to the Flynn/Papadapwhatsas side.

Exhibit B: Jim Jordan (R-OH). This guy, one of the founding Tea Baggers, remains one of the most outspoken critics of the Russia probe. He has fought this narrative from inside and out. Forget The Donald for a moment, anyone who tries to obstruct an investigation into Russian election meddling needs to be charged. In my opinion this guy’s shenanigans reach the level of obstruction of justice.

Exhibit B: Vice President Mike Pence. Our Veep is positioned in the middle of a lot of this schitznik, especially the Michael Flynn chapter. There is no way he is in the dark and thereby understands the scope and breadth of this administration’s culpability. If an impeachment ends with a Pence Administration, we will be even worse off as a nation. I realize that’s one hell of a prediction, but that’s what I do. If this occurs, my recommendation is we all storm the bastille. We’ll first have to build a bastille, of course, which admittedly will be tough to get past the senate, but what isn’t these days?

Exhibit C: Sean Hannity. Hannity is not only an entertainer masquerading as a journalist, he is a secret yet somewhat senior adviser to the president. My inauguration day prediction stands: the day Trump is dragged from office, Hannity will have to break from a segment on Hillary. Yesterday I turned on Hannity for the first time in several weeks (12/7: Hannity’s America) and in the seven minutes or so I could tolerate the dolt, he referenced Uranium One (totally debunked) and illegal Unmasking (see: totally debunked). He mentioned more fictional nuggets about the Clinton Foundation, the “salacious and unverified Steele dossier” that “even Steele himself admitted was false.” (This is another lie as Steele was angry with one of the 78 claims that were published) and, of course, the endless irregularities of the FISA process that triggered the Russia investigation in the first place.

Fear not, fair reader, these will be thoroughly investigated by some future Gowdy-type menace and they will yield the usual ‘meh’ findings. Yesterday they spent all day interviewing Comey and didn’t get one good sound bite. Republicans now had three chances to expose FBI wrongdoing: the IG report, the hearing in July, and this Comey debacle and:

Fox News: we’re going to shift away from the actual news to make shit up.

And, sadly, my friend and blogvesary still champions much of this false narrative and is demanding yet another Hillary investigation into her emails. As I have said before I have no problem with reinvestigating the reinvestigation, but under one condition: you must agree to investigate her predecessor’s use of a private server, Colin Powell, as well as Trump and his family’s ongoing wilful ignoring of these same email security practices. Otherwise this is simply more politically motivated selective enforcement. I could care less either way. It’s 72 on my list, for either Hillary or Ivanka. In general high level peeps need to start protecting their devices, but everyone should be held to the same standard.

Exhibit D: Everyone else. Charge any other high level official who knew about Russian collusion and interference into the 2016 election, but chose to ignore it to protect a sociopathic man-child. Bring them to justice! And to answer your question, Pokey, I mean after I’m proven right about everything. This is tough because the shelf life of a Trump official is so short, but there are members of the White House staff, the intelligence community and congress who protected this president to the point of criminal culpability. Those proven to have broken the law must be added to my frying pan of justice!

There are five key components that may well save our criminal in chief:

1. You cannot indict a sitting president. [Winslow: Not exactly, it is policy, not law; we’d need a Supreme Court decis…OK, no indictment]

2. It will take two thirds of the senate to convict or annul.

3. There are ways that the results of the Mueller report can remain hidden from the public.

4. Collusion/conspiracy is historically a hard thing to prove in court.

5. Our rightwing media, Republican politicians, and the Trump base can continue to create smoke screens, attack the accusers, deny the evidence, and muddy the waters enough to allow ass-clown to keep dancing through this minefield.

They will be investigating Trump’s antics for many, many years to come. Mueller could probably keep chasing down leads endlessly as everyone in all corners of this investigation appear to be liars, tramps and thieves. Isn’t that a Cher song?

As for conspiracy, aka collusion, we are back to my original premise: Russia attempted to collude with the incoming Trump Administration, some WikiLeaks dump coordination is likely to surface, and there are multiple attempts/business deals with Russians that could reach the threshold of criminal. The only thing standing in the way of a full annulment is this: did Team Trump botch the whole quid-pro-quo thing? They all lied about their endless contacts with Russia; they lied about the ongoing business dealings, but let’s not forget for a moment how dumb these key players truly are.

“If a clear dimwit, you must acquit.”