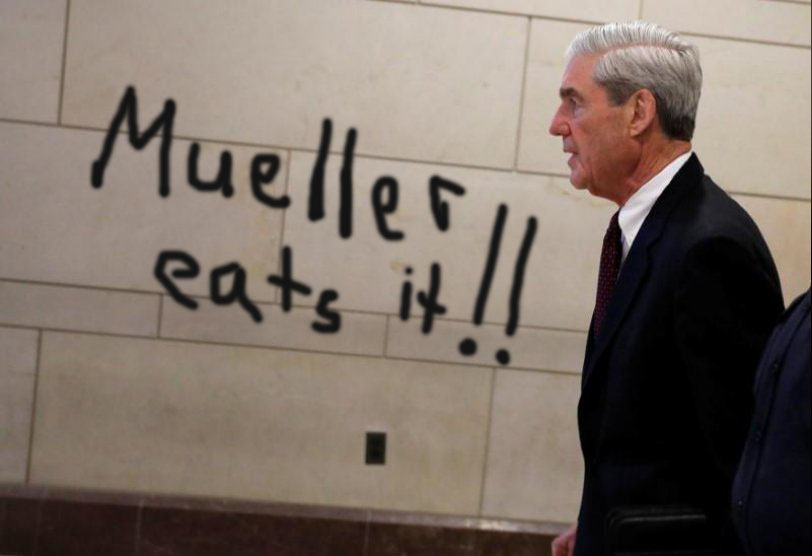 My last article promised ‘objective facts’ on the Russia probe and, as my blogvesary rightly pointed out, I failed to deliver. After a couple of brewskis and pizza, my intro-rant became the length of a typical feature. Wit happens. Whereas bashing the Republican mindset is an important pastime of mine. Collecting and explaining endless facts in a post-truth world is listing heavily toward the vain side of futile. How do we review all of Mueller’s 49 topics of inquiry as broke by the NYTs last leak? On a related note, I started this post 49 times myself, but this is an ever-changing subject …or is it ‘target’ now? Who can keep up with Trump’s misdeeds and antics? Who would want to? Will Mueller or Stormy’s lawyer takedown ass-clown first? My fellow blogger has the solution: just ignore reality and infuse more Hannity. Essential boils? But, hey, if this Discord article doesn’t arrive at your door, hot, steamy and loaded with ‘objective facts’, it’s free! …and probably means I’m loaded myself. Obstruction of Drunkness?

In the comment section, Mr. McDooris asked me, “Do you think Trump is innocent until proven guilty?” Exactly which party has lost track of the rule of law in the 21st century? The people who can’t read The Inquirer want to know. Please don’t pretend that someone who likely voted for Trump is a staunch defender of the rule of law. Absurdity, what’s your policy?

Our president is unwilling to protect the next election cycle from the same Moscow shenanigans, nor is he even willing to admit foreign interference even occurred. This will make all the spooks in spooksville concerned for our national security. Objective Fact: Apparently no one in the Trump administration has officially even addressed this matter with the intelligence community. Donald J. Trump is failing to uphold his sworn duty to protect the Constitution and this alone is grounds for his removal from office, forcibly if necessary, preferably by clowns. (The Bozo Bounce Amendment was added during the Carne Code Convention of 1788.)

Today, as I write this, the Russians are now trying to hack Mueller’s office #SpookyLeaks? This should be the end of the article …and of the Trump Administration for that matter, but here are the three main areas of the Mueller investigation:

Fun Fact: When the intelligence community was wrong (Iraq), Republicans believed them. And, when they are correct (Russia interference), they don’t.

Upon reading the leaked Mueller questions to the NYTs, unfortunately this area is on the chopping block. I do commiserate, if everything in a forty year span of time is corrupt, where does one begin? Perhaps if Mueller was in his twenties…

Money laundering, especially as it relates to Russia, is well within the scope of the investigation as it was written. Why Mueller, why?! It’s not about the end of a presidency, which is inevitable, it’s about my two for three Mueller prediction.

“It has been widely reported that a vast amount of Russian money is tied up in President Donald Trump’s assets and business interests — interests which Trump, breaking with longstanding precedent, refused to divest or put into a blind trust upon assuming office. Recent reports have shown that money continues to move into Trump-branded properties from obscured sources like anonymous LLCs and shell companies.”

If Mueller fails to investigate money laundering this may constitute a dereliction of duty. Hire more people! It will help the unemployment rate drop further. Hell, it could end unemployment. Since its inception, Trump’s entire empire ranges from totally questionable business practices to really shady ones. Here’s a good article from The New Yorker, which places money laundering in the forefront of our president’s former and present business practices: Trump’s Business Of Corruption. See, other people have done this already. You shouldn’t get all of your news from a spoof news site.

Objective Fact: Donald Trump applied for a casino license on the Vegas strip and was denied. Trump then built the largest hotel-only structure on the Las Vegas strip (minus any casino).

Too shady for Sin City? We’ll leave the red light on for you? Hey, I have the perfect presidential candidate for the 2016 election… I should probably add how in 2017 Trump paid $25 million to Trump University grads who were defrauded.

“The subject was booked under Section 601, in danger of leading an idle, dissolute, or immoral life.”

Trump just tweeted, “THE RUSSIA PROBE MUST END NOW!” He’s basing his decision on the flawed congressional investigations and the polls over at Fox & Friends. Here’s a more compelling statement, “THE TRUMP ADMINISTRATION MUST END NOW!”

I have only been to court a few times for personal reasons—mostly as a character witness for when either Dave Pa or Shag ran a bra up a flag pole or some other trial of the century—and yet I, a novice, could convict Donald J. Trump for obstruction of justice. He fired three people while they were investigating his ties to Russia: Sally Yates, Preet Bharara, and James Comey, and then he attempted to fire Robert Mueller and Rod Rosenstein. He also put pressure on his own Attorney General, Jeff Sessions, not to recuse himself from the investigation for the purpose of keeping a loyalist overseeing the case. And, now The Washington Post claims Trump is rallying the crooks in Congress to draft articles of impeachment as his own “insurance policy” against Rosenstein.

Trump said on Lester Holt (CNN) that he fired Comey, “Because of the Rusher thing.” I realize our president is not linguistically articulate, but most translate this to mean #TheRussiaThing. And just this week, Slate Magazine got more of the scoop from the Dems minority report, wherein both McCabe and Comey viewed exchanges with the president as threats if they did not end the Russia investigation, here.

And this week Guiliani cleared stuff up… *cough* Put a fork in it, this presidency is toast. If Mueller does not act on this information that, in and of itself, would constitute an obstruction of justice. Hey, then you could have a relevant counter-investigation.

Prior to the election, Donald Trump Jr. met with a Russian spy in Trump Tower (with the campaign manager, Paul Manafort present). They lied it happened until the email transcript went public, then they admitted that it occurred but lied about the topics discussed. There are emails in Mueller’s hands of an attempt to collude. The Russian spy even states the main topic of the meeting was a quid pro quo: “dirt on Hillary Clinton in exchange for changes to a U.S. law.” Story here.

I’m sure if Hillary met with Russian spies with these uncovered email chains, the GOP would take her word on what was discussed. They should of course:

One of Mueller’s lines of questioning involves Paul Manafort reaching out to coordinate with the Russians. If he did this as Trump’s campaign manager then this one is also in the bag. There is also a very weird timeline on the campaign trail between Trump and Guiliani. I believe it’s evident they coordinated with WikiLeaks, but did they also coordinate with Russia?

Objective Fact: For some inexplicable reason Trump is about the only person in the industrialized world who is against implementing Russian sanctions. When in recent history has something passed Congress 98-2 and then the president intentionally refused to implement? Never, actually.

As for the counter investigation, our Republican friends are not asking for the investigation of a couple of misstatements between spooks, or an inquiry as to whether or not proper protocol was followed with a timed leak; they are attacking the institution itself. With what we know right now, there’s only one institution that you can make broad sweeping generalizations about, and that’s the executive branch.

If you think Benghazi required seven investigations and this one deserves a pass, you need to go back on your meds. Or, if you’re not on meds, get on some. Oh, and as I send this on for posting, NYTs article states Trump may ignore a Mueller subpoena.

The voice of reason: Yes, by agreeing to be interviewed by a Grand Jury.

Giuliani: Well, Mr. Trump is going to ignore the subpoena, but he is willing to allow the replay of that Clinton Grand Jury interview.

That’s not an exact quote, ha! But make no mistake, if Trump pleads the fifth and refuses to answer questions or respond to subpoenas, this marks a constitutional crisis. The trivial pursuit that is the GOP has uncovered next to nothing of relevance in the last two decades of ‘objective fact’ seeking. Why does rightwing truth seeking result in so few indictments, revelations or insights? Shouldn’t objective facts lead to meaningful conclusions? Otherwise we are back to my testicle example from my last post, and no one wants to go there.

At the end of the day, you are betting on dishonorable men over honorable ones. Good luck with that. As for your other point, namely, how you worry Trump may be brought down on some Mueller technicality, umm, this president’s only hope is if he gets off on one.