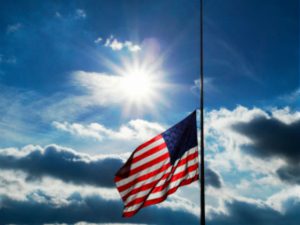 Tweet Tower—The White House announced that all flags in the U.S. are to be flown at half-staff as the default position until further notice. President Trump told the press today, “With all the constant illegal immigration activities, rats, shootings, rat shootings, witch hunts, and even rat shooting witch hunts, the flag will be flown at half-staff all the time. I only have half the normal staff to run this dump, so it’s fitting. The flag can be returned to the usual way up high position when I say so. This will be easier than all that up and down for every shooting, misstep, tragedy, or important guy kicking the bucket. Eventually I might have the flag raised or lowered based on my mood, you know, when I get laid, acquitted, whatever.”

I think we should fly all flags at half-staff until old half-ass is out of office.