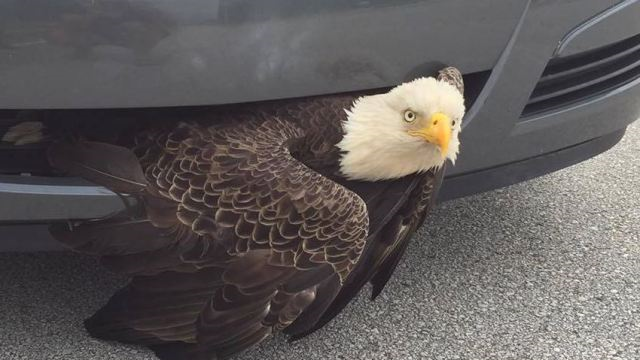 Clay County Florida—After rescuing a bald eagle wedged in a car grille, the Clay County Sheriff’s office is now admitting the bird was actually just hiding there to avoid the 2nd presidential debate. Sheriff Roscoe P. Justice explains, “We know the bird was uninjured when we found her, which we initially attributed to luck, but that changed quickly. We knew something was up when we freed the bird entirely, but it still didn’t want to come out.” According to several witnesses from the Sheriff’s department, the storm-drove-the-bird-into-the-car theory started to unravel after the eagle became agitated while officers were playing the debate. “The thing went nuts every time either candidate spoke,” said Deputy Droopy Fife. “I have never seen anything like it, well, except for that time a marlin jumped into a fishing boat just to avoid the Oscars. In the marlin’s defense, it was Neil Patrick Harris.”

The woman, whose car is now damaged from the incident, is considering pressing charges against both the eagle as well as the Sheriff’s department. The owner Betty Wright said, “They cut the bird out of the front of my car. If it was the storm’s doing that’s one thing, but that fucker was hiding. The little shit needs to just suck it up an watch that train wreck of debate just like the rest of us. They also named him, Mathew, after the storm. Uh, how about changing that to The Donald. The little fucker.”

The legal representation for the eagle, James Markup, said, “This has been a tough year to be an eagle. First Glenn Frey and now this. I think we need to be aware how the health of our nation’s political system can be especially hard on our feathery symbol of freedom. Do you or a loved one feel you suffered emotional trauma from watching the debate? Call me.”

In related news: 4 Out Of 5 Bald Eagles Plan To Relocate To Canada Under A Trump Administration.