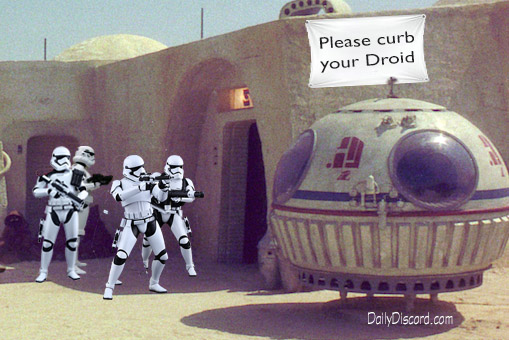 Tatooine—Chalmun’s Cantina, an infamous watering hole located at the Mos Eisley spaceport, has closed its space doors forever after a violent incident involving an Ewok and the hind end of a Tauntaun. Shortly after the Imperial Stormtroopers’ arrival, their blasters claimed the life of the owner, a Wookie, and several of his staff. Empire personnel then arrested 23 of the establishment’s intergalactic patrons. The Empire hopes to reopen the bar again soon, complete with extended hours, an expanded menu, and more of a Neimoidian theme.

Grall, of nearby Anchorhead, told the Discord, “The Mesra plateau won’t be the same without old Chalmun’s place. Sure it’s an inconvenience for travelers looking to wet their whistle, but what about the locals like me? Am I supposed just mill about the Jundland Wastes? Have you ever just milled about the Jundland Wastes? There’s a reason for that. I mean Wastes is right in the name, you see. Fucking Empire, bloody fascists that lot.”

The Empire is already downplaying the incident and released the statement, “You mother fuckers blew up our Darth Star! So can we all just please put this whole pub-closing-thing into perspective?!”