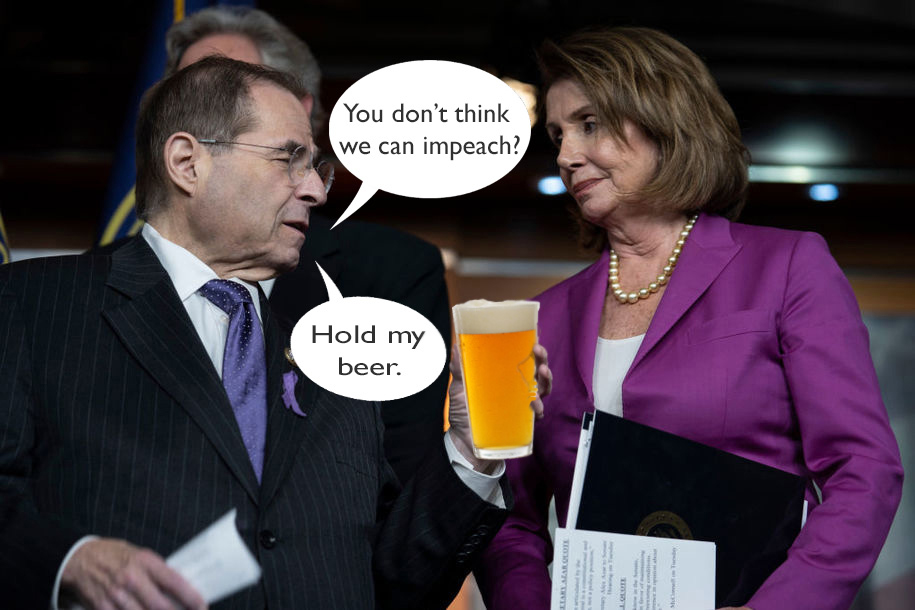 Washington—This week the House votes on the continued relevance of the rule of law. Will Chairman Jerry Nadler’s Judiciary Committee efforts get upgraded on Thursday to a more formal level of impeachment hearings? The president is sweetening the pot by adding some perks for those who vote against impeachment, such as: pre-pre pardons (which goes into effect even before the president thinks of them), leeway to rough up the witnesses (Black Sites Matter!), Magic Sharpie privileges, and full pussy-grabbing immunity #FreeToo! Nancy Pelosi is dragging her feet a bit on pulling the impeachment trigger. First she said, wait for a majority of the House to support impeachment, and now she’s saying, well, we also need the majority of the public on board. What next, lady, some house cat polling? Simon is fully behind impeachment proceedings, but Flopsy and Mittens are still concerned about the political implications. It makes me want to gack up a hairball.

Have you seen your average political thread in the last several years, Madam Speaker? You wanna wait until the general public agrees on something? Even some Discord fans, the brightest around the net, thought this headline was real: AG Barr Blames Epstein’s Death Behind Bars On Epstein-Barr, and why all the sad faces for Trump Holds Emergency Summit With Actors Who Portrayed Presidents In Film? Morgan Freeman is smarter than Trump, so any meeting with someone savvier than our president should be considered a small …well, sure, even the Taliban is savvier, but my spoofy shitness doesn’t deserve the rash of sad face emojis, is my point. Geesh! …unless it’s a reaction to my humor, in which case I totally understand.

At this point impeachment should be unanimous and broken down thusly:

[Retraction: that equals 111%! Because our impeachment reasons go to 111!]

I will admit that I too was waiting for that definitive moment, an event or deed that when exposed would force even the GOP to tack back to reality, but it’s not going to happen. Trump drives the narrative and his minions drown out the truth each news cycle, very effectively. The truest Trump statement was his assessment that he could, “Gun down someone on 5th Avenue and not lose a vote.” We must expose all of his wrongdoing, in list form, during formal impeachment hearings and when the senate ignores everything then we come for them. If we lose the next election, so what? If I were in Congress, I would not want a vote on the record that defends this vile, ass-clown of a man.

Look, gang, you don’t want to be the guy in Germany in ’32 saying, well, say what you want about this Hitler fella, but he really brings a certain energy to those rallies. Don’t be that guy. Sometimes you have to speak truth to evil; consequences be damned.

[Herr Ball joke gacked up by the editor.]