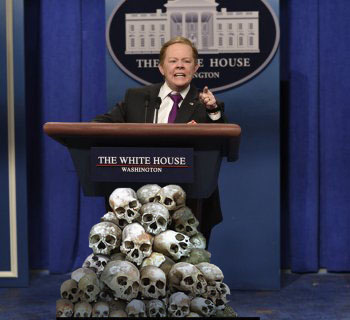 Aztecia—Despite repeatedly explaining how the Aztecs were defeated by the Spanish in 1521, President Trump remains insistent on meeting the Aztec King, or any member of his cabinet. His interest was sparked after an Aztec tower of skulls was discovered under the heart of Mexico City. The president is even willing to meet the King at a pyramid, “if there’s proper air conditioning involved.” The president believes the Aztecs could become crucial allies in both reigning in drug cartels as well as the building of the wall along the U.S. southern border. “I know they’re into some freaky shit down there, but I think we can work with them, or maybe their neighbors, those Inka people, who do office supplies or something. Do you think any of them pee on their women?”

[Kinkos joke removed by the editor]

President Trump told the Discord today, “Melania and I have been to Aztecia many times, great desserts. I just want to meet their el hefe and see how he gets shit done down south. Think about a new alliance with these Aztec warriors! After all, they built the pyramids, maybe they can help build my wall. As for that skull tower that was recently dug up, what if we had a similar tower of skulls around my press secretary’s podium? Maybe then fake news would be like, this guy’s serious, we need to be fair to him and say nice things. I think that could go a long way to restoring my faith in their coverage of my fuck ups.”

The republican establishment is also excited about the prospect of a new southern partner. Speaker of the House Paul Ryan told reporters, “Think about what we could accomplish if Americans were convinced the sun was powered by human blood? We would finally get the worship and adoration we deserve. As for all those Medicaid expansion people, they become wall-building slaves and if they ever need healthcare we tear out their still beating hearts to subsume their vital energies. It’s win-win, sort of. I think Ayn Rand eludes to something like this in Atlas Buggered.”