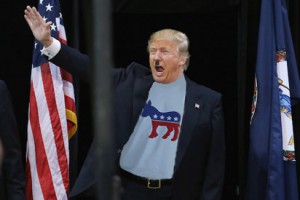 Philadelphia, PA—When I post stuff I usually just make fun of stupid people, like Zano. But here’s a unique opportunity to get all political and make fun of stupid people in one post. In case you‘ve been living on Mars, Donald Trump is leading the GOP polls by a near-record margin. The man is obviously pandering. I’m talking about Trump, not Zano…this time. He will say anything and everything just to appeal to “real Americans”. What kills me is that so many people actually believe him. Notice how he always speaks in generalities? “Oh, you don’t want to know what I would do to the terrorists.” Really? I think I do. That’s why I asked the question. Come on Don, what are ya gonna do? Are you going to shift to the middle?

I find myself asking how this ass-clown could possibly be that popular. How can anyone take him seriously? I have gravely underestimated the moronity level of the Republican electorate, which is no easy trick. To me, Trump is more of a novelty candidate like The Mighty Ducks of Anaheim or The Discord’s Ghetto Shaman. But is there more to this story?

Let’s take a look at Donald Trump’s 19 Point Plan to Make America the Best (borrowed from here), complete with commentary:

“If I’m elected I’m going to bring back Christmas.”
—The Donald

Wow, I didn’t realize it had gone anywhere. I looked at my calendar and, yep, it’s still there. My children certainly haven’t lost sight of it. I don’t remember any executive orders being handed down banning the discussion of Christmas. I thought the whole “Happy Holidays” thing was just society’s generic solution to the fact that there are dozens of holidays centered around the winter solstice. Have a slammin’ Saturnalia! No one ever gets that one, even Ronald Pagan. And just how would Trump “bring back Christmas” anyway? I guess he would ban all the other winter holidays. Christianity uber alles!

Donald Trump is playing to the hot-button topics of the day. He’s using half truths and impossible promises to grow his poll numbers.  Kidding, only .5 percent of republicans know what half means. This anti-fact shit may work in the primaries but I can’t imagine Trump being electable in the general election. Of course, that’s what I thought about W, twice. After all the population is getting stupider.

Trump and the rest of Republican party has pissed off the minorities, which are no longer so minor. But you can cannot win an election on white bread alone. Wonder why? He’s chased off most blacks, Latinos and women. He was even booed by the Republican Jewish Coalition. So who’s left? By creating these stricter voting laws they are really minoritizing the minorities. I’ll use any excuse to link to this clip (I had it watch it again, just now), besides the fact it’s relevant and accurate.

So how can Herr Trump possibly think he’ll garner the female vote? And how does he think he can win without it? My abacus doesn’t go high enough to count the sexist remarks and implications he’s made. Not Zano, I’m still talking about Trump. And what about all of that catty shit with Rosey O’Donnell and Megyn Kelly? Women represent 61% of the voting public. Although chicks seem to go for that catty shit so who knows? I’d say that a guy who says that the best position for a woman in a boardroom is “on her knees” (true story) has totally blown that demographic.

All of that said, I believe that Trump is more than a novelty candidate. I believe that he is a Democratic plant. I’m not talking about Mary Jane, I ruled that out with exhaustive study *cough* *cough*. Throughout Trump’s history, most of his campaign money has gone to the Democratic Party, that is until five years ago. Still, I believe he’s a smart guy, despite the obvious evidence to the contrary. He can’t possibly think that pissing off huge segments of the electorate could win him an election (See: Bush Sr.). I think he’s a red herring…or an orange hairing. He has managed to throw the GOP into an even higher state of chaos than they already were. Jeb is no longer relevant as are as the rest of the Teabag Taliban. He has also made a victory in the general election nearly impossible for himself. This is not a problem if he has no intention of actually winning. The result: an almost guaranteed win by any spirochete the Democrats nominate (Hillary leads him in every major poll except Fox News’, but they make shit up). But, again, I thought the same thing about W, twice.

The flipside is a bit more disturbing. He’s using a total pandering barrage to get the zealous support of a population tired of the grid-locked government, the influence of foreign interests and the success of ISIS globally. He’s breeding even more fanatical nationalism by milking xenophobia, racism and religious bigotry. Sorry, but that’s The Discord’s job. One would think that in an enlightened society his approach would fall flat, but it worked remarkably well in Germany in the 1930s. One can’t deny how The Donald is gaining traction. While Adolf Hitler lost the election, he became an appointed Chancellor (essentially VP) due to he and his party’s popularity. He then succeeded President Paul von Hindenburg when he died in ‘34. You all should remember what followed: many of Trump’s campaign promises came to fruition: state-dictated religion, ethnic cleansing, and global war on a scale never seen before or since. At least they all said “Merry Christmas” while goose-stepping into Warsaw.

So to The Donald I say, “Party on Dude,” as long as the Democratic President doesn’t appoint you Chancellor. I know a dictator when I see one…all kidding Assad.