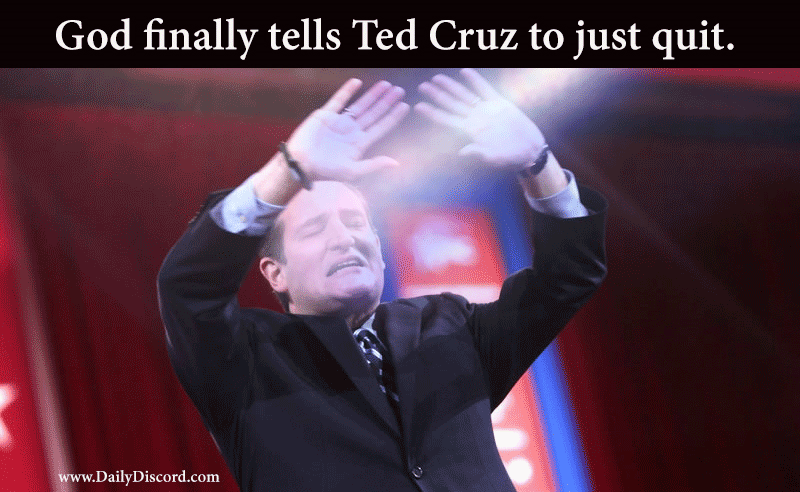 Heaven—God is reportedly “furious” with Senator Ted Cruz’s recent political antics. As Cruz delivered a speech on the virtues of clean Tar Sands earlier today, God disrupted the proceedings with a blinding flash of Photoshopped light. God then commanded: “Thou shalt retire from politics indefinitely!” The almighty later told reporters he was not impressed with the Texas Senator’s recent debate performance or his fantasy football picks. God then sent an official Notice of Tablet to Cruz Headquarters, certified mail, within the required time frames.

The Cruz camp remains torn between obeying the almighty and seeking a second opinion. “It’s not a blasphemous move,” explained Cruz. “Using, say, Zeus or Vishnu on a consultant basis is fine. Belief and worship are entirely different categories with different associated fee scales. Think about it, you throw five bucks into the collection plate each Sunday, right? Now try comparing that to your average deity’s consultant rates. Zeus’s fees alone are straining my Super PAC and so far he’s only told me to ‘F-off!’ Hell, I had to reverse mortgage my second home just to pay for the exclamation point. Deities, they’re enough to make you question your faith.”

When asked about the potential consequences of ignoring God, Cruz said, “It’s okay, I prayed on it. I told the heavenly father, let’s agree to disagree. Besides, I still think this is all some sort of  misunderstanding. He was probably trying to reach Huckabee. Angelical errors are on the rise, you know. God is omnipotent but it doesn’t mean he’s infallible. I would filibuster the heavens themselves if I thought it would lower tax rates one dime for like-minded, clean shaven Americans. God will smite me—I mean, thank me later. After all, lest we forget that all-important Ned Flander’s quote, ‘I’ve done everything the Bible says, God! Even the stuff that contradicts the other stuff!’ When I hear that quote and some of the other stirring conversations between Flanders and Reverend Lovejoy, I think Ted & Ned 2016. In fact, I’m going to have my people call Harry Shearer’s people. Yeah, though I walk through the Valley of Death, I will hear no evil…especially when the almighty starts sounding as liberal as The Pope. Here’s your five bucks God and tell Zeus to shove that lightening bolt up his ass.”