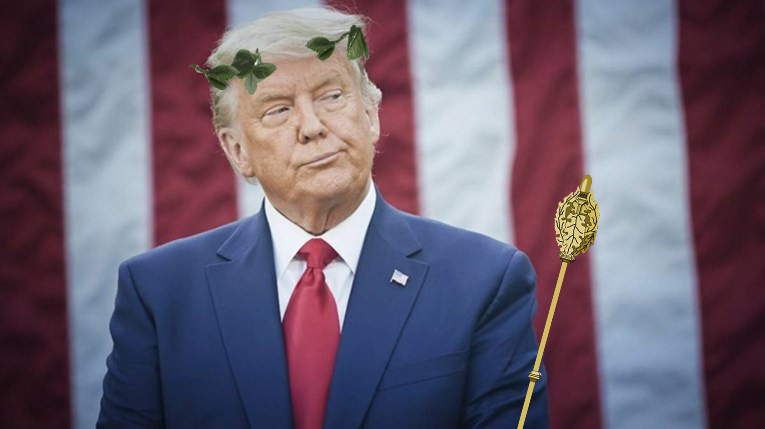 “Over the last two years I’ve been charting how our politics today increasingly resemble those of ancient Rome. From rising economic inequality, political violence, and governmental dysfunction on through the generally lackadaisical reaction of the Senate to a losing chief-executive candidate’s conspiracy to murder many of them, overthrow the government, and thereby block certifying his defeat, events in ancient Rome have remarkably paralleled some you might recognize more recently.”

The Rome comparison is forever present in my scribblings. Here’s a Bush family nepotism joke from 2009:

“If you don’t believe in the cyclic patterns of history, then try this on for size. Anyone remember Marcus Aurelius, arguably one of the greatest emperors in Roman history? He chose his moronic son, Commodus as his successor and, well, I think they eventually named the commode after him. (I’m guessing his first name was probably Loo or John, or maybe Crapper John A.D., but I digress…).”

The rest of my Rome comparisons at the end of the article.

Meanwhile, I predicted somewhere around 2004 how the point of no return would occur amidst the next republican president’s tenor, PD (Post Dubya). Whereas this already happened, it is rather nebulous; the lights are still on and the Starbucks are still open. It wasn’t a full-blown, fast and hard collapse. I talk about tipping points and I say things so long before they happen that I can hardly Fallows them myself. Sorry.

“Will the Trumpist party similarly ultimately prevail once they cross the Rubicon? I have been predicting for years that something resembling a civil war will arise and something like Trumpists likely will carry the day in the short-term. But a reactionary philosophy that rejects fact in favor of fantasy, is economically retrograde and socially repugnant to the majority of Americans, can impose its rule for only so long.”

Whereas I agree with parts of this assessment, I do not share his optimism of some restoration under the steady hand of the sensible majority.

What is also absent in Fallow’s analysis is this: real money in the US is not only concentrated at the top but, in a more globalist society, it can move to New Zealand in a heartbeat …you know, like the head of Google did last week. Or it can build a colony on Mars, aka pick your favorite bond villain tycoon. Hey, maybe it does trickle down …should a rocket explode upon re-entry.

Fallows also neglects to mention how most of the world would rather deal with China or Russia than the US, although this may have shifted somewhat under Biden. An unstable superpower can not lead. Should the EU and the rest of the world further marginalize the dollar by untangling itself from Wall Street, that would not represent, as Fallows suggests, a rich country under a republican dictatorship; it would be a complete shitshow. We could end up closer to Haiti than Finland on most indicators. This is still a very real possibility.

Over the years, I wrestled with two possible scenarios for our nation’s demise: a slow collapse, like Rome, or a much quicker one like, say, Tokyo during any given Godzilla movie.

If forced to guess, I say we limp along for a few more years until some real cliff emerges on the horizon. I don’t think we’re going to fade away over several centuries, like Rome. For our rank incompetence, I think those events on the horizon …let’s put it this way: the aftermath of the US collapse may contribute in some small way to Stephen Hawking’s theories.

“One striking element is the complacency highlighted by Schnurer at the time of Cicero, and so evident now in the mistaken belief that ‘it’ can’t happen here because we’re ‘exceptional.’”

Hmmm. So where did you hear that sentiment first? …yeah, probably 476 AD Italy, but you did hear it here second.

“Have you been following the Republican debates? This particular Super PAC propagandic extravaganza makes the last days of Rome seem like The Garden Reiki Wellness Center (2012).”

“In recent years, MSNBC has decided to be Fox on the left to, you know, single handedly balance out Fox, and the result is the abysmal failure of cable news. Bread and circuses, Nero fiddling, fat lady’s singing, dogs and cats, living together, mass hysteria.”

Then, of course, my live Vegas coverage of the pandemic in 2020: “Where better to watch the fall of Rome than from the shadow of Caesar’s Palace?”

And these: “But I’m not trying to convince our woefully uninformed electorate of any of this ‘last days of Rome’ schitznik, instead, I’m here today to seize power at this critical juncture.” My coup attempt failed and, worse, I wasn’t dressed as snazzly as that Bison Shaman fella. Disaster!

And finally, in some year or another, I said: “…America is starting to make the last days of Rome look like Walden Two.”

By no means is this an exhaustive list, but my Rome comparisons are as constant as the northern star.