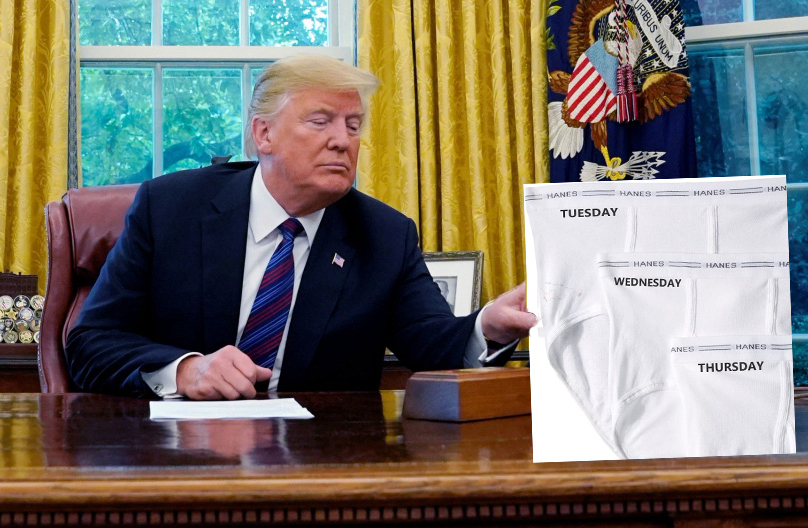 Tweet Tower—President Trump has changed his position multiple times on whether or not he was briefed on Russian bounties being placed on the heads of US military troops in Afghanistan. Initially, Trump denied ever receiving the intelligence, then he admitted he had but that they were “not read to him out loud.” Yesterday, his story changed yet again to, “I received the briefing, but only read some of the words.” Today the president added, “When they said Bounty I was thinking about the quicker-picker-upper and my AWESOME paper towel chucking in Peurto Rica after Hurricane Maria.” Criticism of the president’s failure to read the intelligence briefing in its entirety prompted the president to address the issue, complete with visual aids, from the oval office. “I change my briefs every day, and I had them labeled so I am always using the right brief for the right day. The rest is a HOAX started by the liberal media!!”

At a State Department news conference, Mike Pompeo, told reporters, “The President is briefed on threats to this country each and every day and they are each ignored equally, without bias. We did weigh our options at the time, like could we respond without making Russia angry, could we put a larger bounty on those Russians responsible for putting the bounty on our troops, or could we offer more money to the Taliban to just be cool already?”

Russian President, Vladimir Putin, is believed to have sent the following message to the president, “Remember the Moscow Hotel recording? I am aboutyay otay eleaseray ethay eepay apetay to the New York Timesyay.” The message was sent with a corresponding link to a well respected Pig Latin translator, and the correspondence ended with two ‘wink’ emoticons.