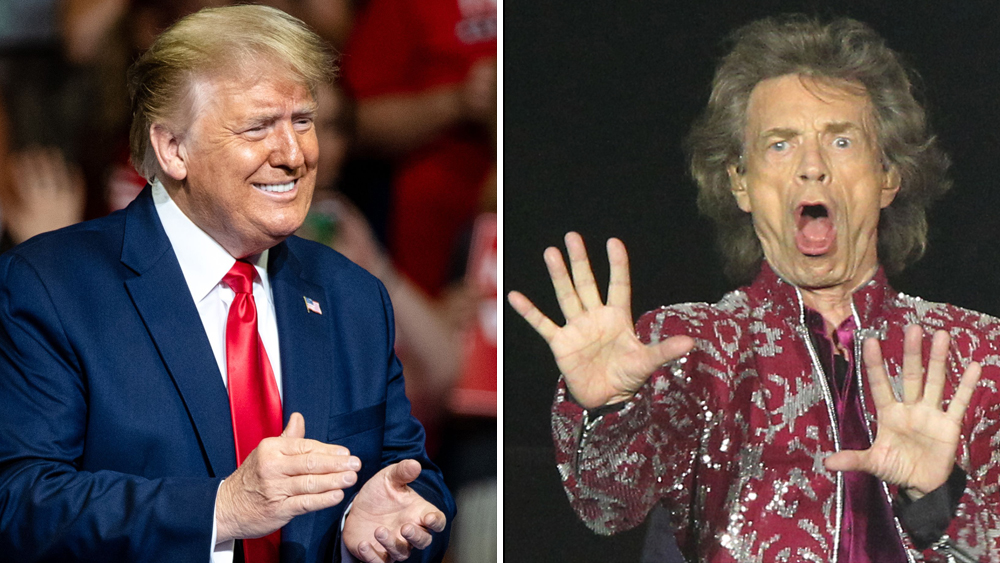 Tweet Tower—Rock legend, Mick Jagger, is being held without bail in the bowels of Tweet Tower and his bandmate, Keith Richards, is wanted for questioning after eluding police by jumping a fence and scaling the side of a six-story building. Amidst a DOJ investigation into the origins surrounding the FBI’s Trump-Russia probe, also known as Crossfire Hurricane, the Rolling Stones were named as Individuals 1-4 for coining that phrase in the early seventies. The President has used this fact to detain the rock legends while crafting an executive order to rob them of the rights to their own songs for upcoming Trump rallies.

Trump demanded the lead singer drop the threat of a lawsuit for the unauthorized use of Stones’ songs during his rallies. The president then promptly signed an executive order for the rights to several hits crucial to his reelection campaign: Sympathy for the Devil, When the Whip Comes Down, Rough Justice, Under my Thumb, Bitch, No Expectations, Heart of Stone, Before They Make Me Run, It’s All Over Now, Midnight Rambler, Shattered and, of course, Ventilator Blues from their Exile on Main St. album.

When asked President Trump defended his decision to detain the rock band, “The FBI and the DNC colluded, and possibly rolled, with those damnable Stones. Not Roger Stone, I’m pardoning him next week, but the bad Stones, you know, Mick whatsas and that guy who can’t die. He could be a mutant, like Wolverino or Iron Man. They did that song too, right? Wolverino? Why didn’t Eisenhower stop the British invasion before it started?”

Before souring on the band, the president initially tried to woo Jagger to the dark side, “We have the two biggest mouths in the world,” said Trump, “if we could combine forces we could take out that guy from Aerosmith.”

Mick Jagger has denied anything to do with the onset of the Russia probe, but he has admitted to being “born in a cross-fire hurricane,” and he, “howled at the morning driving rain.” But he also wants his fans to know, “It’s all right now, in fact, it’s a gas.”