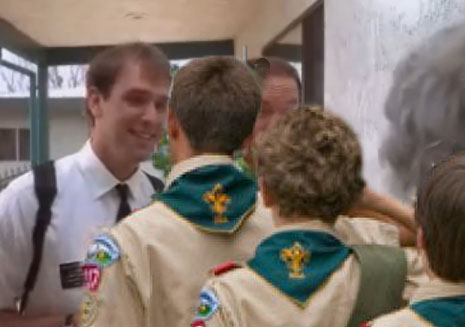 Salt Lake City, UT—Since the Boy Scouts of America’s decision to allow openly gay children into their fold, the Mormon Church threatened to outright sever relations. After lengthy negotiations rivaling the State Department’s Iran deal, the two organizations have reached an agreement. Mormons are allowed to enrich uranium for peaceful purposes, provided they allow the international community to inspect their magic underwear. Wait, what?

I don’t have any material this week. Don’t tell, Mr. Winslow. I don’t think he even reads this shit anymore. Last Christmas for a bonus I got a pen set that turned out to be pencils. You have to load the lead in and then when any pressure is applied it breaks. Then you keep reloading. What a douche. Remember getting the Led out with Carol Miller? Man, I miss New York…and i miss Led Zeppelin. I don’t miss lead pencils, or the staff Christmas party. Winslow will say it’s an open bar and then when you try to leave you get a bill. I never wanted to be a spoof news blogger. I always wanted to be a lumberjack. On that note, here’s me singing the Lumberjack song in a bra. Remember, this is our secret…you know, about the lack of an actual article today—not the bra thing. I wear those all the time.