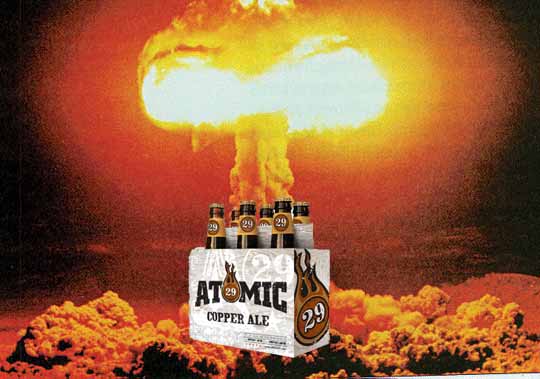 As the number of craft breweries in the U.S. climbs to 3,500, psychologists are taking note of a developing phenomenon. Studies suggest craft beer drinkers are having less sex. Mick Zano may hold to his man-boob phytoestrogen theory, here, but I think there’s something else lingering in the air.

According to the latest Bottomup Poll, consisting of 20 craft beer related questions, 30% of males between the ages of 25 and 45 believe some of the worlds best beers are better than sex. Females in the same age range were asked the same questions and a muffin cutting 65% said that the moment was actually ruined by beer related flatulence (BRF). Nearly a quarter of those women blamed their own brand and 60% blamed their partner’s crop dusting diligence (CDD). The rest blamed me…apparently.

This stinks! Not the Dingleberries’ song, I love that. The craft brew industry is rightly concerned this may contribute to their own smelly demise. Economists are forecasting a negative impact on future sales. Brewers are scrambling for ideas to make craft beer more alluring by creating techniques that use oyster and lime additives. Environmentalists are turning to their gardening experience with Milorganite and harnessing the fertilizer from Milwaukee’s beer drinking population. Taking advantage of local sustainable methane, they are setting up methane bottling stations in Denver, San Diego, Portland, and Ashville, NC. This is called brown energy, or it should be.

As I was breathing in all of this information on bottom burps, I was reminded of a story that a close friend of mine had shared back in college. He went to a new “microbrewery” in State College, PA, with some friends. They all wanted to see what this “microbrew” business was all about. We, I mean they, had all read the beer descriptions on the menu and he fell in love with the description of a porter. They all decided on pitchers of the porter.

Each of us, I mean them, revered the dark color and roasted aroma of the beer and took their first sip. But then, “BLAAAAAAH!” Bitter beer face! My one friend, however, was immediately in love. They all ordered lagers and slid the massive quantities of porter pitchers to him. I drank it lovingly–I mean, he drank it lovingly. Later that evening, he went home with a girl he had met over the summer. Much to his chagrin, he could not perform due to his holding back some serious porter pooh gas. Once she fell asleep, he crept off to the bathroom and the porter plume erupted. The first case of Craft Beer Cock Block was in the history books.

I am currently formulating a recipe to both save the craft beer industry’s future as well as some of our sex lives: Wissinoming Brewery is now working on a Flatulence Free Brown. A Nutty, aptly named brown ale, with a curious nose. This fall we hope to tap a Smell Free Saisson as well as a Fartless Flemish Sour. I’m being told this will be my first and last article here on The Discord. It’s one more than I thought, so it’s a small victory…Yes, a Victory Stormking Shart!