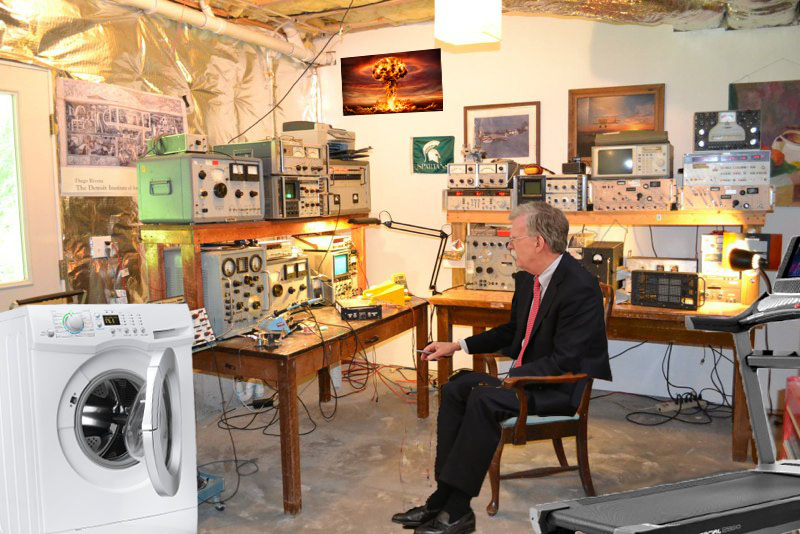 Bethesda, MD—The International Kryptonic Energy Agency (IKEA) believes ousted National Security Adviser, John Bolton, is only 12-months from the development of a nuclear weapon. An exclusive McClatchy report has the undeclared uranium processing facility situated in Bolton’s basement between his washing machine and Nordic Track. Bolton maintains his efforts to develop a bomb are for “peaceful purposes only,” and he told the press today during a joint press conference with his Nordic Track that: “My home atomic energy efforts are to power my washing machine as well as my Nordic Track …you know, so I don’t have to.”

Those close to Bolton believe he is willing to sign a non-proliferation treaty, provided he can spend one more week as National Security Adviser just to “blow some shit up.” He claim he wants to get it “out of his system,” and promises to default to the president’s judgement regarding when and where he should blow shit up. President Trump has not ruled out unilateral talks with Mr. Bolton, provided one or both parties are not present.

The IKEA added that although Mr. Bolton is roughly two years from obtaining an atomic bomb, the sophistication of his missile system remains very primitive at this time and may not pose a threat to Charlie’s Corner Pub, or the nearby 7-11 for another several beers. The agency is currently urging the president to consider rehiring Mr. Bolton as he may do far less damage as Trump’s National Security Adviser than if he is left with more free time to pursue his current hobby interests.