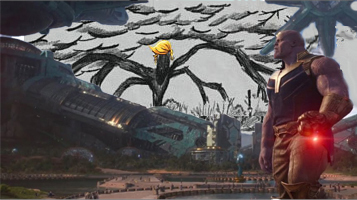 You have to love the neocons. No really, it’s going to be a law soon. Sure Trump’s foreign policy is all over the map, but let’s hope his military aspirations won’t be. I’ve never been a huge fan of our neocons and it’s curious why a group without any clear victories since WWII remains so confident. Their ability to flourish minus any actual positive feedback is legendary. They are like the tardigrades of the political world, tiny mindless soldiers who can thrive even in the icy void of space. The more hawkish side of republicana represents the last gasp of the rightwing intelligentsia, for whatever that’s worth. Sure the Goldbergs, Kristols and Krauthammers always represented the conservative ‘adults in the room’, but it doesn’t make them any less dangerous. Bill Kristol, an affable well-spoken type, always had military interventions on speed dial. His Weekly Standard just tanked, but before his neoconservative rag joined the choir invisible he floated the idea of regime change in China. No joke. I guess when your ideology is heading for a big fall, you might as well go out with a nuclear winter. In their defense, we can’t just have the best military in the world hanging behind the 7-11, right?  We’d need a bigger Gulp.

I praised Trump back on the campaign trail for calling out the stupidity of our country’s obsession with unnecessary wars. Sure it was at a Nebraska rally and I was chanting ‘lock her up’, ‘lock her up’, but I didn’t really mean it. So, no surprise, Herr Drumpf countered this rare moment of lucidity by hiring the hawk of all hawks, John Bolton, as his National Security Adviser. No, not that singer from the 80s. I wish… How am I supposed to invade without you?

The military adults have left the building and a ton of key cabinet positions remain empty, so this is an ideal time for another country to test us. Putin, armed with the pee tape, might be taking that bait.

[Russian Pissile Crisis, Russian Bear vs Bare Pissing Match, and Moscow on the Slutson joke removed by the editor.]

Whereas my friend fears one far left voice at the Congress level, I have warned of his side’s whole shit-n-caboodle, forever, or at least since I was going Dole to Dole for Bob Door. Sorry it’s a blizzard in Flagstaff so I started early.

In 2003 our neoconservative friends pushed the ‘Iraq = 9/11’ narrative and we all know how that ended. Wait, uh, I’m being told that hasn’t ended. And when our warmongery friends say Obama pulled out of Baghdad too soon, just remind them that he shouldn’t have followed Bush’s Iraq Status Forces Agreement. Today, the Foxeteers believe the Iran deal didn’t curb its nuclear ambitions and that Trump alone defeated ISIS. Creating a new reality through Foxal matter is kind of what they do, and no mission is too shortsighted, costly, or counterproductive #Tweeting&AbettingTheEnemy.

A recent Harvard study backs my thesis that after the 2016 election even the supposed brain trusts of The GOP were starting to lose ground to the tidal wave of rightwing misinformation:

“Our comparison of the network structure of the 2016 election with that of October 2012 shows that even more traditional conservative sites like the National Review or the Weekly Standard lost significant ground to the more radical media outlets on the right between 2012 and 2016.”

The neocons did nothing to stop the widespread misinformation campaign so their death is at least, in part, self-induced. And even though the neocons have been quiet lately, with John Bolton as Trump’s National Insecurity Adviser, their resurgence could still be on the docket. Lest we forget, there’s no foreign issue they can’t magnify, escalate and then botch.

With the U.S. out of the Iran deal, the president is one step closer to the next unnecessary war. Thankfully there’s still a few key things standing between Trump and Tehran:

1. Approximately two thirds of likely voters are against a war with Iran, so such a war could backfire for Trump in 2020.

2. The Iran Deal is still being held together with duct tape and string by the other key remaining players, but how long this will hold before Iran resumes its nuclear ambitions is anyone’s guess.

3. Besides Israel and the Saudis there’s not much of a ‘coalition of the willing’, and they hate each other.

A Saudi, Israel, U.S. coalition would be closer to an Axis of Evil than a Coalition of the Willing.

Even though our republican friends will forever fall for this shit, the international community isn’t having it. The latest on the persistent strength of the Iran Deal, here. Only time will tell if the good guys prevail.

Hint of the day: if you’re a republican, you’re not the good guys.

This next exchange captures the essence of the neoconic scheissgeist:

Chris Wallace: “But under your watch Iran went from zero known centrifuges to more than 5,000.”

Dick Cheney: “I don’t think of it that way.”

Of course not, this is how Cheney thinks of it:

Can you spell Halliburton? Your president can’t. Republicans would gladly support a nuclear Iran, because it’s never been about our safety; it’s always been about the money. Juan Cole was on point:

“The U.S. will try to get Iran to withdraw from the nuclear pact by aggressively tightening the sanctions. If Tehran takes the bait, Washington will claim the legal right to attack Iran. Bolton and the people around him engineered the catastrophes in Afghanistan and Iraq (the Obama administration gets the blame for Libya and Yemen), and knocking out Iran has been their longtime goal. If they pull it off, the U.S. will ignite yet another forever war.”

I know my friend and blogvesary was against the Iran Deal, but I couldn’t find anything when searching The Discord archives. I did find two of his semi-related predictions: 1. Hillary Clinton’s hacked email is now in the hands of Iran and they’re about to use this important ‘top secret’ info regarding her yoga classes against us, and 2. The lost Malaysian flight is in the hands of Iran who will use it to nuke us any minute now. Hmmm. Maybe there’s a reason my friend avoids the archives. But, hey, why address real issues when you can squabble over the day’s news cycle in a chaotic blur of zenwrongness?

Meanwhile, I predicted, long ago that the republican’s would end the Iran Deal. Oh, but I also promised to shut up about this eventuality back in 2014:

“Now I’m watching a president, who I voted for, struggle to do what’s right and the same people want us to jump the shark again (with Iran)? Give it a rest, people. Tell you what, if you win the presidency in 2016, you can end the world then. Deal?”

And here’s one that never made it out of The Discord draft folder, ha, ha: “This is why the Iran Deal will likely fold like a house of cards in an F4 Trumpnado.” Today I would have gone with F5, but live and learn. I also found a quote of mine from last year that hints at the demise of Kristol’s Weekly Standard:

“On some level he (Kristol) understands the havoc his ilk has wrought on our country and our Constitution and, although he’s not particularly happy about it, he’s not really sure where to turn the last of the old Republican guard. In the end, perhaps he’ll realize the GOP is a false choice between rampant brainless populism and catastrophic hawkish nation-building.”

The neocons have always represented that dangerous ‘ounce of knowledge’ phenomenon that the rest of repubilicana clearly lacks. In 2019 there are two types of neocons left, the ones who have denounced the president (Jonah Goldberg, Meghan McCain, William Krystol), and the ones who have left the party outright (George Will, Max Boot, Tom Tancredo). What iconic neoconic peep still supports the Trumpster? But please don’t mistake this for insight. These folks can ‘never-Trump’ until the troops come home, but if they stay in control …the troops never will.

Mr. Kristol probably takes some satisfaction in the appointment of John Bolton, a man not as bright, but clearly with the same misguided imperialistic tendencies. Although weakened, can our more hawkish friends still successfully orchestrate their agenda and make a case for the next forever war? Fox & Friends have proven they can sell anything to their listeners. Facts.Be.Damned.

Hey, I found a kindred spirit in Caitlin Johnstone! Here’s her words:

Step One: Pick any disputed issue of foreign policy.
Step Two: Find out what the dominant neoconservative think tanks are saying about it.
Step Three: Advocate the exact opposite position with confidence and authority.

Wow. I should sue! She’s still missing this part, though:

Step Four: Reince. Priebus. Repeat (so I am copyrighting that shit, right now ©).

Here’s some wisdom from my favorite Christian conservatives (other than the Pokester):

“The United States does not and never will possess the might to bend the people and powers of the world to our will. Hence we should not expend our blood and treasure attempting to do precisely that. The U.S. has interests, and it should defend them, with force when necessary. But those interests ought not to be defined so broadly that they extend to every corner of the globe, colliding with the far more powerful interests of those who actually live in those corners of the world.”

Isn’t it odd that the republican intellignetisia left the building without even a passing reference from my blogvesary? He’s not a patterns guy, but, in his defense, none of them are. Look, I haven’t asked you to reject all things republican, just everything from the last twenty years. I don’t buy your argument that this is just the toddler-sociopathic phase of your important, righteous movement. Your ilk is dangerous and history will judge them as such.

Who will replace this gap in the rightwing intelligentsia? Thus far the trend today is this: a barely sentient republican is replaced with an even less sophisticated version. Sure the trend is missed, but the consequences won’t be. I think Iran will eventually return to their nuclear ambitions. In the end, blowing up some our finest diplomatic wrangling ever will bring about what it always intended to …the blowing up of Iran. You might want to take heed, or take benzos. Whatever works.

On a good note, there is a new hope emerging from the Coalition of the Cognizant. It’s not just our liberal resistors, the international community as well as our own intelligence community have identified the real threat, aka, the enemy within. But don’t worry about the neocons, folks, the future of the GOP’s more warmongery brethren is still bright—let’s just hope it’s not bring-your-nuclear-flash-eye-protection bright.